In 2018, Wake Forest School of Medicine launched the Kennedy-Hopkins Scholars Mentor Program to improve the experiences of underrepresented minority residents and fellows through mentorship.

In the current climate, academic medical institutions everywhere are having to grapple with the culture of their organization as it relates to inclusion and diversity within their faculty, staff and medical trainees, as well as the widespread implications of not having a diverse staff. Despite national initiatives to increase the diversity of the health care workforce, certain groups remain underrepresented.

Although institutions everywhere are looking for ways to systematically increase diversity and improve the experience of underrepresented minorities in the health field—both as medical professionals and as patients—one woman turned to a tried-and-true method: building relationships.

According to the CDC, there are five broad categories that determine health, including social factors. It’s well-established that social determinants of health—such as education, food security, access to health care, living conditions and social support—have significant bearing on the health outcomes of ethnic minorities and their communities.

“There is substantial research on health inequity and health disparities,” says Artina Dawkins, PhD, founder and program manager of the Kennedy-Hopkins Scholars Mentor Program at Wake Forest School of Medicine. “That research provides significant evidence for the importance of a diverse physician workforce.”

Studies have established that a diverse medical workforce can address health disparities, including a study that found that the mortality rate of Black newborns decreased 39% to 58% when Black physicians were in charge of the births. As minority groups make up an increasingly large segment of the U.S. population, addressing health disparities becomes more pressing.

The need to diversify the physician workforce is trickling down to medical education. The American Association of Medical Colleges (AAMC) has published data indicating the lack of diversity in practicing physicians and medical school faculty, and accrediting bodies such as the Liaison Committee on Medical Education and the Accreditation Council on Graduate Medical Education are developing policies that encourage medical education programs to recruit diverse workforces.

A Dearth of Diversity

Dawkins first came to Winston-Salem as an undergraduate majoring in biology at Wake Forest University. Two years after graduation, Dawkins joined Wake Forest Baptist Health as a lab technician. In time, Dawkins grew into new roles, including residency program manager and co-director of diversity and inclusion for the Orthopaedic Surgery Department and serving as affiliate faculty for the Maya Angelou Center for Health Equity. 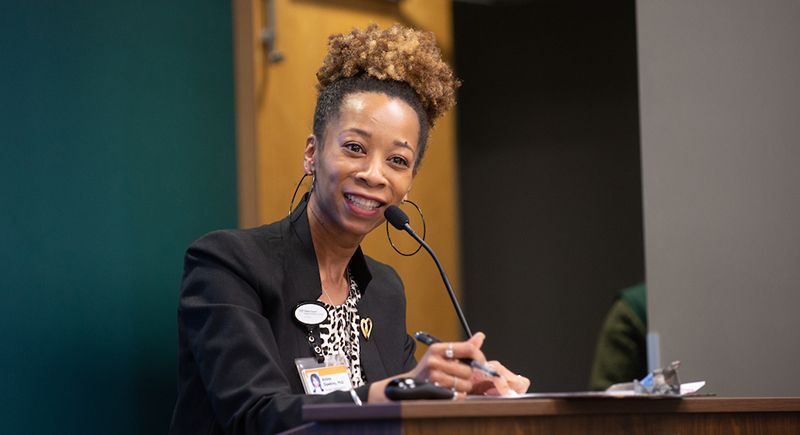 Working closely with residents in these roles, Dawkins noticed a trend. Year after year, residents, fellows and faculty would come and go, but the diversity—or lack thereof— remained the same.

This problem stayed with Dawkins for years as she mulled over potential solutions to the challenges she saw underrepresented minority (URM) residents and fellows facing. Across the nation, URM trainees and medical professionals report additional challenges during training such as differing expectations and social isolation they experience in a manner that non-minorities do not.

"There is often a sense of isolation minorities feel, and that can affect their ability to function in the learning environment, as well as their overall health,” adds Brenda Latham-Sadler, MD, associate dean of Student Inclusion and Diversity at Wake Forest School of Medicine. Alongside Dawkins, Latham-Sadler helps lead the Kennedy-Hopkins program.

The challenges URM residents and fellows face during their training can lead to long-term challenges for their careers.

“Even how URM medical professionals are perceived during their training can affect their opportunities for collaborations in research, publications and presentations that can advance their career trajectories,” Latham-Sadler says. 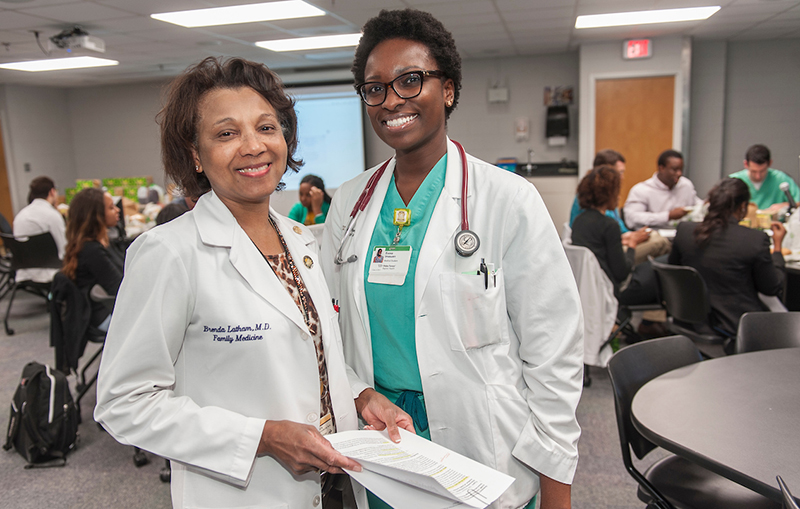 In addition to negatively impacting individuals, these challenges create a loss for the institution. As they explored this problem, Dawkins and Latham-Sadler observed that residents and fellows who have a negative experience during training are likely to leave the institution and can cast a negative perception of the program, which can lead to downstream effects such as future recruitment, retention and alumni giving.

During the time Dawkins and Latham-Sadler were investigating these issues, the leadership of Wake Forest Baptist Health, the entity that employs resident and fellows, and the School of Medicine, the educational body over the programs, cast an institution-wide challenge to grow diversity across the organization. This challenge provided Dawkins a prime opportunity to propose new solutions to the Dean’s office.

“As an organization, we must diligently work to change the negative narrative and ensure that Wake Forest is an environment where minority residents and fellows thrive,” Dawkins explains. “Rather than sit on the sidelines and watch these types of occurrences play out in our institution, I came up with an intervention to address them.”

What Dawkins brought before the School of Medicine’s leadership became the Kennedy-Hopkins Scholars Mentor Program, a program that bridges the gaps between URM residents and fellows and their majority counterparts by providing professional and personal support, primarily through faculty mentorship.

Of all the possible ways to tackle the problems facing URM medical trainees and faculty, why choose mentorship?

Throughout her career, Dawkins has sought out mentorship and knows firsthand the impact a good mentor can have on a mentee’s career path.

“Growing up, my parents instilled in me the value of a great education.” Dawkins says. “After a conversation with one of my mentors, my desire to pursue a terminal degree was re-ignited.”

Dawkins’ doctoral degree in leadership studies gave her a research-oriented focus that was instrumental in founding the Kennedy-Hopkins program.

For many medical professionals, a key component of a successful mentoring relationship is a mentor who can understand their experiences or help facilitate professional and personal success.

“The Kennedy-Hopkins program is designed to support and empower our residents and fellows who are from populations traditionally underrepresented in medicine through mentorship and professional development,” Latham-Sadler says.

A key aspect of the program is a mentees’ option to choose a mentor based on their personal goals and objectives. A person may select a certain mentor for a number of reasons, such as gender, ethnicity, personal interests, professional interests, career aspirations or similar experiences. The faculty mentors in Kennedy-Hopkins Scholars come from various ethnicities, but what is most important is facilitating mentor matches guided by the resident or fellow.

To understand the impact the Kennedy-Hopkins mentoring relationships has on URM residents and fellows, just ask Chukwuweike “Ikey” Gwam, MD. Gwam is a first-year resident in orthopedic surgery at Wake Forest and has been a part of the Kennedy-Hopkins program for a little over a year.

When he joined the program, Gwam was looking for someone to relate to his experiences.

“As a minority, there are certain fears, worries and joys we share,” Gwam says. “Minority mentors understand those fears and can help you navigate through them.”

In his mentoring relationship, Gwam found a listening ear who provided a safe place to process and speak candidly without fear of judgment. It’s a relationship that has produced confidence in multiple areas of his life, not just his career.

“I have learned, by talking to my mentor, that I have what it takes to become a good surgeon, a great father, family man and researcher without having to sacrifice one for the other,” Gwam says. “This is what has kept me pushing forward.”

Although Dawkins realizes mentorship is only one mechanism to provide support, she knows it can make a big difference in the lives of the people who participate in it, such as Gwam.

“It can make a lasting impact to have someone who will support you in your training and your career, particularly for underrepresented minorities in academic medicine,” Dawkins says.

How the Program Works

“At our one-year-anniversary, we unveiled the name ‘Kennedy-Hopkins Scholars Mentor Program’ in honor of two of the giants in medicine at Wake Forest,” Dawkins explains. 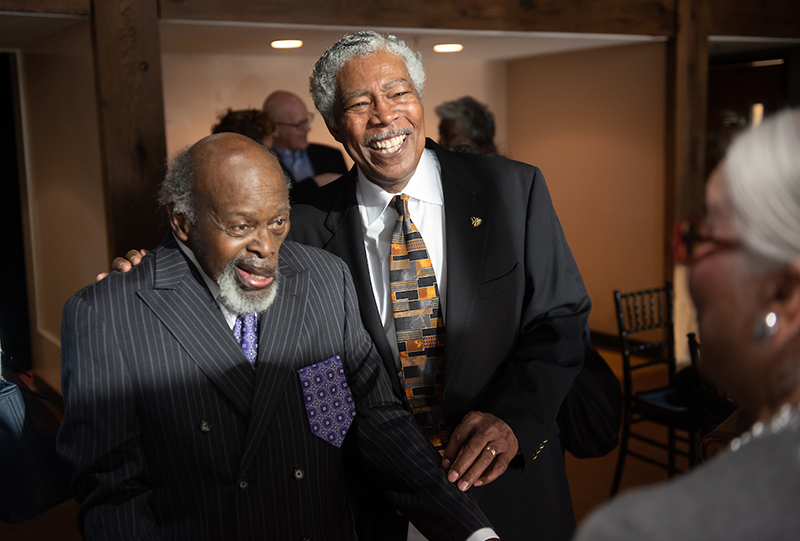 The legacies of the program’s namesakes as mentors undergird the importance of the first component of the Kennedy-Hopkins program, where the staff help residents and fellows select a faculty mentor based on characteristics they value.

In addition to matching mentors and mentees, the Kennedy-Hopkins Program also offers an educational component: programming centered around information and resources on mentoring, leadership, health disparities and more.

“The program sets a high standard for our professional development workshops, drawing from local and national talent,” Latham-Sadler says. “This is a program that I wish I had access to when I was in training.”

On top of mentorship and programming, the Kennedy-Hopkins program is also dedicated to providing opportunities for residents and fellows—as well as their mentors—to engage with the local community.

“If you’re plugged into the local community, you have a much richer experience,” Dawkins says. “Community engagement is a powerful tool in creating opportunities for URM residents and fellows to care for and build relationships with patients in the local community.”

The program was created to work in concert with graduate medical education programs as a tool to support, value and empower URM trainees. Maximum impact occurs when all work together—as a medical community. Many program directors, faculty, chairs and staff have ‘linked arms’ with this program as a display of their support.

“It is important as educators that each resident who comes to train at Wake Forest has an optimal experience.” Dawkins says. “If we want to significantly increase the diversity of our trainees, we must identify the barriers to diversity and implement processes to counter them.”

The goal of the program is to ensure that URM residents feel supported. There is no shortage of willing faculty mentors of different ethnic backgrounds who are willing to share their wisdom and experiences with the next generation of physicians.

“Residency and fellowship are meant to be rigorous, but as a minority trainee there are additional perceptions and obstacles that you have to overcome,” Dawkins says. “Through the Kennedy-Hopkins Scholars Mentor program, we are committed to ensuring that every resident and fellow is valued and respected.”

Learn more about the Kennedy-Hopkins program.