Like all MD students at the Wake Forest School of Medicine, Brielle Paolini, PhD ’15, MD ’17, graduated knowing exactly what a Foley catheter is and how to place one.

“I honestly never thought I would have to do that procedure in my career as a diagnostic radiologist,” Paolini says.

But she did, as a first-year resident at the Medical University of South Carolina. One day, as she and other residents were preparing to leave for a lunch meeting, a technologist rushed into their reading room looking for someone—anyone—who could place a Foley catheter for a patient.

Paolini volunteered. The technologist, she recalls, was shocked.

“He said, ‘I thought only the nurses did that.’ I told him I had placed a bunch of them in medical school, and I felt comfortable,” she says. She performed the procedure and went to meet a friend, who listened as Paolini explained why she was late.

“She said, ‘You did what? Had you done that before?’” Paolini says. “I told her, ‘We had to perform a lot of procedures to graduate from medical school. Didn’t you guys?’”

As it turns out, no. Paolini was the only resident in her cohort who had been trained in the procedure.

“Wake Forest set me up for success not only in the diagnostic and intellectual arena but also with basic procedural knowledge,” Paolini says. “That’s something I took for granted until I entered residency and realized my skill set was not universal among all medical students nationally.”

The Value of Interprofessional Education

The procedures Paolini learned are one example of how the School of Medicine uses innovative approaches to make sure all of its graduates are fully prepared for their careers.

Another is interprofessional education, where students from various programs have opportunities to learn together.

“Other places are doing interprofessional education, but I think we do it at a very high level,” says Lynn Anthony, MD, House Staff ’01, senior associate dean of faculty affairs.

According to Executive Vice Dean Terry Hales, MBA, the school made a deliberate decision just over five years ago to better coordinate training across the MD, Nurse Anesthesia, PA and Biomedical Science Graduate programs to more closely resemble the care teams graduates would work in once they left school. 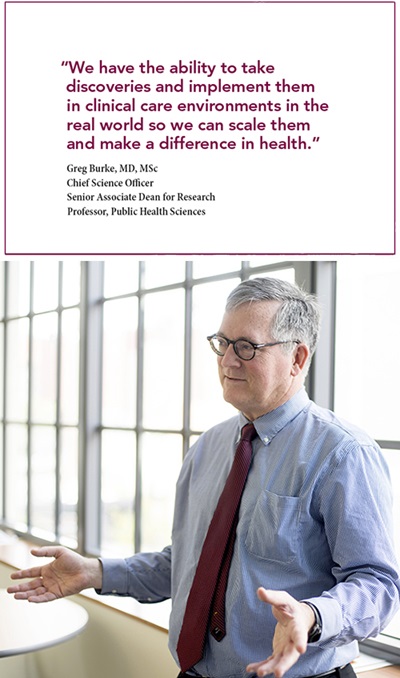 “We realized if they’re going to be coming together to practice as a care team, we need to more formally educate and train them as care teams,” says Hales, who also serves as senior vice president for academic administration and operations. “That really caused us to become very purposeful in our education and curriculum even as we have different programs.”

“We have the ability to take discoveries and implement them in clinical care environments in the real world so we can scale them and make a difference in health,” says Burke, senior associate dean for research.

The interconnected culture benefits education as well as research and patient care.

“It’s essentially an overarching strategy of the institution,” Burke says. “We’re seeking to break down some of those barriers and have different folks who would previously be in one silo or another work more with each other. The more of that we do, the better we’ll be, because other places don’t have the culture that we have for developing teams that will function well clinically and from a discovery standpoint.”

An Inspiring Setting for Students and Learners

Putting all of the school’s programs in one spectacular setting in downtown Winston-Salem also has helped. The MD, Nurse Anesthesia, Doctor of Nursing Practice, PA and Biomedical Science Graduate programs are all based in the dynamic Innovation Quarter, a sector where former tobacco manufacturing and warehouse spaces have been repurposed to help revitalize downtown. 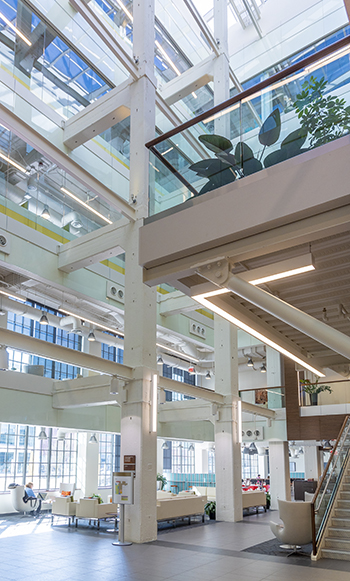 “I think we have a responsibility to inspire students and learners,” says James Patterson, director of marketing and communications for the Innovation Quarter. “These spaces are all about inspiration in the way they are built. You walk into this atrium in the Bowman Gray Center for Medical Education, and you can’t help but look up.”

Getting people to look up, he says, is all part of getting them to think about what’s possible.

“It’s just that spirit of getting people to think bigger,” Patterson says. “Julie (Freischlag, MD, CEO and dean) always talks about how her brain feels bigger whenever she’s here. That’s the sense we’re trying to create through spaces and collaboration.”

“If you look at any successful researcher, they are by definition an entrepreneur. Their responsibility is to get extramural funding for the things we do. The research enterprise brings a little more than $210 million a year into the community based on people being creative and entrepreneurial.”

The common setting downtown makes it easier for programs to share resources.

“Frankly, the fact that our buildings share a walkway has lent itself to a really cool community downtown,” says Kristin Henderson, DNAP, CRNA-MSN ’09, who directs the simulation labs for the school. The labs, located on the fourth floor of the Bowman Gray Center for Medical Education, are shared among all the programs.

The labs replicate settings for examinations, surgery and trauma situations. In summer 2019, the labs were used to help approximately 400 Wake Forest Baptist Medical Center staff review obstetrics protocols to prepare for the launch of the new Birth Center.

“Leadership has been very open-minded about how we can best use all these resources for anybody in the health system,” Henderson says. “I think the intended use of the simulation space would be for the graduate medical learners, but leadership offered up our resources when the institution decided to offer an obstetrics service line. Clearly we needed to refresh or educate our folks who would be working in those areas to provide the safest patient outcomes.”

As a student, Henderson was among the first to use simulation education in the Nurse Anesthesia Program. She sees great value in learning basic procedures, as Paolini did.

“Everyone’s a learner at some point, and if you can learn the basics very well, that speaks to how much potential you have to grow in your complex advanced skills,” Henderson says. “We’re not always going to be teaching them complex surgical procedures, but if we can build that critical thinking and task base for them, they’re only going to build a stronger career and skill set when they go out and work.”

For Hales, the school’s educational mission has never been more important to the overall Wake Forest Baptist Health system.

“I’m convinced that for a health system to be optimally successful in the future—reimbursement, quality, all the things that it takes—the appropriate academic presence is required, because that health system is going to have to be in a perpetual state of learning to perform as it needs to,” says Hales.

“It’s the academic enterprise that gives that health system the learning culture and mentality it needs to be successful.”