Rafael Davalos, PhD, Honored by Journal for Second Most Cited Article in 50 Years 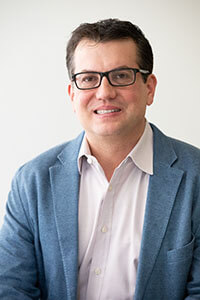 When Rafael V. Davalos, PhD, published his groundbreaking 2005 article “Tissue Ablation with Irreversible Electroporation” in the Annals of Biomedical Engineering (ABME), neither he nor his editors foresaw its long-term impact. Today, with more than 1,300 citations, it is the second most cited paper in the journal’s 50-year history.

“It was exciting to see how our paper led to numerous clinical trials to treat cancer and for cardiac ablation, but I never imagined that it would end up No. 2 of all time,” said Rafael, Endowed Professor in the Virginia Tech-Wake Forest School of Biomedical Engineering & Sciences and Signaling & Biotechnology Program leader at the Atrium Health Wake Forest Baptist Comprehensive Cancer Center. “ABME is the main journal for biomedical engineers, so it is a big honor for me.”

Rafael is a prolific researcher, writer and speaker for numerous professional bodies spanning the bioengineering field. When the ABME journal told him that they wanted to present an award at the 2022 Annual Meeting of the Biomedical Engineering Society in October, he was already scheduled to give a plenary speech at the 4th World Congress of the International Society for Electroporation-Based Technologies and Treatments in Copenhagen. They agreed to move up the speech, and he booked a return flight to San Antonio.

In 2005, Rafael was just three years out of his doctoral program at the University of California at Berkeley. The ABME paper stemmed from Rafael’s thesis work on using electrical pulses to make cell membranes permeable to chemical or genetic therapies. He used mathematical analysis to show that the same pulses could be used to rupture cell membranes and kill them.

Rafael’s mentor at UC Berkeley, Boris Rubinsky, PhD, ME, Professor of the Graduate School, was a co-author of the paper and went on to receive numerous patents for therapies using irreversible electroporation.

“It's great to see how much impact our paper has had not just in the research community but in patients’ lives,” Boris said. “Rafael is a brilliant scientist and was a pleasure to mentor. It makes me happy to see how his career has thrived and how much he has advanced the field since graduation.”

To date, Rafael has authored or co-authored 140 peer-reviewed journal articles (cited more than 14,000 times in aggregate), 29 book chapters and review articles, 141 abstracts and 60 peer-reviewed conference proceedings. He is principal or co-recipient of 41 U.S. patents, and he has been part of funded research totaling $34.8 million with over $9.5M his share.

Over the past 20 years, Rafael has collected more than two dozen awards for teaching, research, inventions and even a previous editorial award for the most-cited article of 2019 in the Journal of Vascular and Interventional Radiology. He is a Fellow of the American Institute for Medical and Biological Engineering and the American Society of Mechanical Engineers. His research interests today include many leading-edge bioengineering technologies from which the next generation of cancer therapies may emerge.

“Rafael has been a tremendous addition to our Comprehensive Cancer Center, both as a leader of the Signaling and Biotechnology Program and through his research on identifying the utility of using next generation electroporation approaches in patients with brain tumors,” said Glenn Lesser, MD, FACP, Endowed Professor in Oncology, Director of Medical Neuro-Oncology and Co-Leader of the Center’s Neuro-Oncology Research Program. “This project, and the work done by Rafael and his team at Virginia Tech, have been critical to the success of our National Cancer Institute-funded Program Project Grant looking at novel technologies to target and treat malignant brain tumors. In addition, Rafael is extraordinarily collaborative, generous with his time and effort, and a top-notch mentor to students, post-docs and early career faculty.”