Simon was best known as a consummate educator and pediatrician. The thousands of medical students he taught over the course of his career knew him as the “Simonizer” for his no-nonsense demeanor and his devotion to the profession. 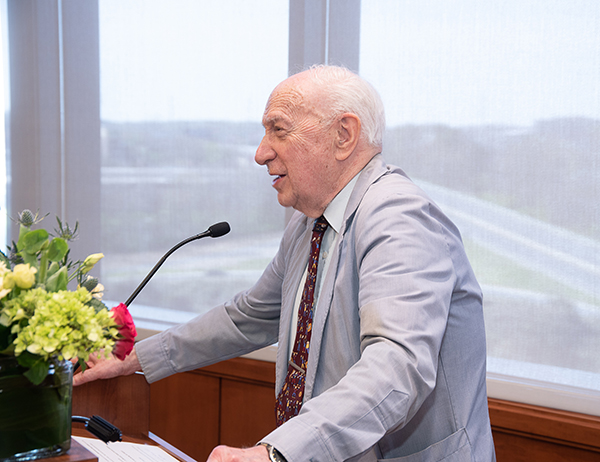 Simon had high standards and made work rounds with medical students and residents every day, asking questions to ensure that all of them thoroughly understood the art and science of pediatrics. He cared deeply and was readily available to provide support in times of need for everyone. His philosophy: The secret to patient care is … caring for the patient.

In 2017, former residents and alumni who trained across many decades and practiced across the country returned to thank him for the pediatric education they had received and to reminisce. They fondly remembered many of his expressions, affectionately called Simonisms, such as: “There ain’t no fairy godfather,” “It’s gravy under the bridge,” “I’ve seen the light at the end of the candle,” and “Rome wasn’t burnt in a day.”

Born and raised in San Francisco, Simon did his undergraduate work at the University of California at Berkeley. In 1955, he received his medical degree from the University of California, San Francisco Medical School. He spent his early and mid-career at academic medical centers in California, Oklahoma and Texas. In 1974, Simon joined North Carolina Baptist Hospital as chair of the Department of Pediatrics when it had 12 faculty members.

As he was building the department, he shared his dream of building a major children’s hospital that was made possible through the generous contributions of Morris and Gertrude Brenner, Abe and Miriam Brenner, and Herb and Ann Brenner. With Simon’s vision and the generosity and hard work of many individuals, Brenner Children’s opened in 1986 to improve the health of children and families through research, education, advocacy, clinical care and population health.

He received multiple teaching awards from the universities of Oklahoma and Texas and the Wake Forest School of Medicine, as well as several awards from the American Academy of Pediatrics. In 1996, Simon received the prestigious Joseph St. Geme Award, which is given each year to an academic pediatrician who is selected by all of the nation’s pediatric societies. From 1987 to 2009, he served or led a number of pediatric societies, clinical and academic education organizations. He was on the editorial boards of Pediatrics in Review and Pediatrics. He served as chairman of the Council on Pediatric Education of the American Academy of Pediatrics from 1993 to 1997.

Simon retired in 1996 and became chair emeritus but regularly came into his office at the School of Medicine. In 2017, the Jimmy L. Simon, MD, Fund to Support Pediatric Residency was created in his honor. He later received the esteemed Order of the Long Leaf Pine from the governor of North Carolina, as well as the Medical Alumni Association’s Distinguished Faculty Award from the School of Medicine.

Grimes was known for his compassion and his commitment to a life of service. The Rocky Mount, N.C., native earned a bachelor’s degree from Clark College in Atlanta and a master’s in zoology from West Virginia University. In the late 1960s, he attended what was then the Bowman Gray School of Medicine, where he served as president of the student government and two student medical associations. 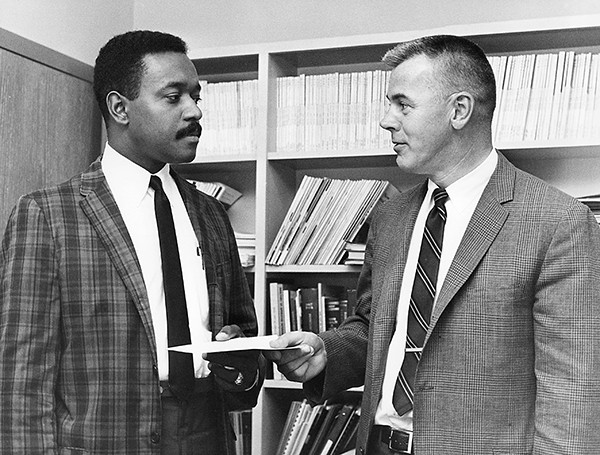 “Bill Grimes was just a great guy,” said William N.P. Herbert, MD ’72, one of Grimes’ classmates. “He seemed to be everybody’s friend.”

Charles H. McLeskey, MD ’72, said he got to know Grimes much better in later years during alumni dinners and reunions than he did while they were in school. He recalls Grimes as a quiet and friendly classmate.

“He always appeared to be reserved and in control, almost unflappable,” McLeskey said.

“This could not have been easy as he was blazing the trail of integration at Bowman Gray and at North Carolina Baptist Hospital,” Woodruff said. “I never observed or heard him complain of any discrimination, but certainly this must have occurred. To add that burden to the already great one of just being a medical student must have been difficult.”

Grimes completed an internship and residency at Madigan Army Medical Center in Washington state and settled in the Seattle area, working at Overlake and Evergreen medical centers and in private practice in Bellevue, Wash., for 29 years. He retired in 2006 but continued serving as a locum tenens physician.

“I would ask Bill why he elected to do locum tenens work,” McLeskey said. “He said he thoroughly enjoyed going somewhere new and bringing his skill set to a new practice. It was like an adventure for him that he would do for two or three weeks. He also told me he turned down a lot of offers, and I think that’s pretty typical of Bill. He was selective and careful. He wanted to do the right thing, but he also wanted to do it in the right way.”

Grimes was a member and former president of Bellevue Rotary, and he served on the boards of several community outreach and humanitarian organizations. In 1996, he helped found and opened the Bellevue RotaCare Free Clinic, which provided health care for those with the greatest needs.

“Bill really went above and beyond,” Herbert said. “He sacrificed to provide care and was genuinely interested in the people he was helping. He was interested in everybody.”

Added Woodruff, “No one could have been a better example for others to follow in his footsteps than Bill Grimes.”

Survivors include Anne Grimes, his wife of 42 years, who was a nurse when the two met while he was completing his residency; and a sister, Janice Grimes Lewis of Augusta, Ga. In his memory, Anne Grimes is endowing the William T. Grimes Jr., MD Scholarship to support students who help achieve and sustain the diversity of the student body and who have demonstrated financial need.

Slusher taught and mentored a generation of ophthalmologists, touched the lives of thousands of patients through his outstanding and compassionate care as a medical and surgical retina specialist, and was often acknowledged for his personal concern for his patients. 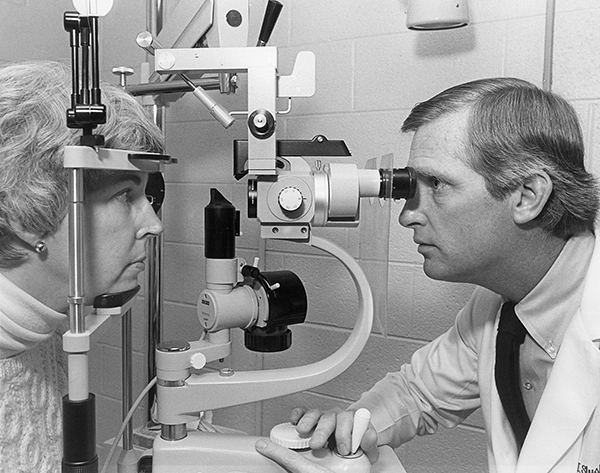 A native of Pineville, Ky., he graduated from Harvard University, received his medical degree from the University of Kentucky College of Medicine and completed his residency at Wills Eye Hospital at Thomas Jefferson University in Philadelphia, where he discovered his passion for restorative care of ophthalmic diseases.

He joined the School of Medicine in 1973 and spent eight years as associate professor, pioneering ophthalmic surgical techniques and studying the best retina and macula care. After briefly practicing in Seattle, Wash., he returned to Wake Forest Baptist in 1983 as professor of ophthalmology to resume teaching while maintaining a private practice in Winston-Salem.

In 1987, he helped develop the Wake Forest University Eye Center. Under his leadership, department faculty achieved a top 10 ranking for clinical care among national departments of ophthalmology, and the Eye Center’s annual conference was established.

Slusher published numerous articles in medical journals, co-authored a major textbook on diseases of the retina and served in a variety of local and state positions. His honors included the American Academy of Ophthalmology’s Honor Award, the Wake Forest Medical Alumni Association’s Distinguished Faculty Service Award and the Distinguished Alumni Award from the University of Kentucky College of Medicine. He was also recognized by many professional societies including the Vitreous Society and the Macula Society.

Patterson is remembered as a model of honesty, integrity and kindness, symbolized by “being present” with his patients long before the term became popular. He often referred to his responsibility to “cure sometimes, relieve often and comfort always” while giving safe passage to children with cancer and their families. 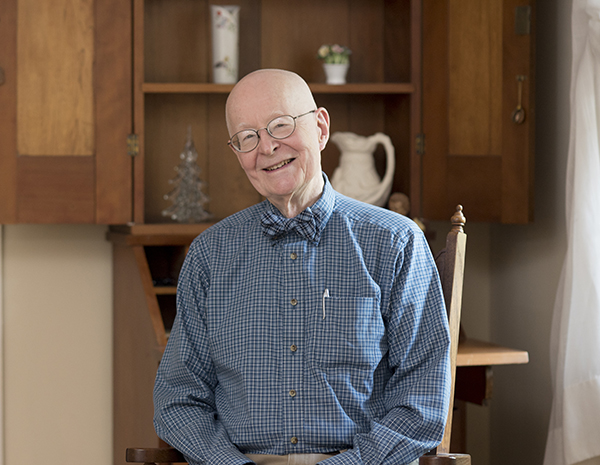 He joined North Carolina Baptist Hospital in 1961 as an instructor in pediatrics and was named professor in 1975. He was the first, and for many years only, pediatric oncologist at Wake Forest Baptist Medical Center. After retiring in 1991, he had an ongoing passion to support the Pediatric Hematology and Oncology section and to mentor junior faculty.

The native of Norfolk, Va., who grew up in Bluefield, W.Va., earned a bachelor’s degree from Davidson College before entering medical school at Bowman Gray. He completed an internship, a residency and a fellowship at Baptist Hospital, and a residency at N.C. Memorial Hospital. He also served as registrar for the Hospital for Sick Children in London, England.

Patterson served two years in the U.S. Naval Reserve, working in pediatrics at the U.S. Naval Hospital in Great Lakes, Ill., before returning to Winston-Salem and establishing the School of Medicine’s Pediatric Hematology and Oncology Division. He served as director of the division and of the premature and newborn nurseries at Baptist Hospital.

He participated in early national programs to find a cure for childhood cancer, particularly acute leukemia, which had an average survival rate in 1960 of nine to 10 months and improved to a cure rate of 85% by 1991. As an advocate for patients and families, he was a key supporter of the Rainbow House dream, which later became the Ronald McDonald House.

He served on the Governor’s Commission of Sickle Cell Disease, as chair of the Childhood Cancer Committee and the N.C. Chapter of the American Cancer Society, and as chair of the Institutional Performance Review Committee of the Pediatric Oncology Group.

Among his honors, Patterson was named a John and Mary R. Markle Scholar in Academic Medicine, and he was elected to the Alpha Omega Alpha honor medical society. In 1991, Wake Forest University recognized him for 30 years of service to Wake Forest Baptist and his compassionate care of children with cancer, and the Medical Alumni Association presented him with its Distinguished Faculty Award in 2018. 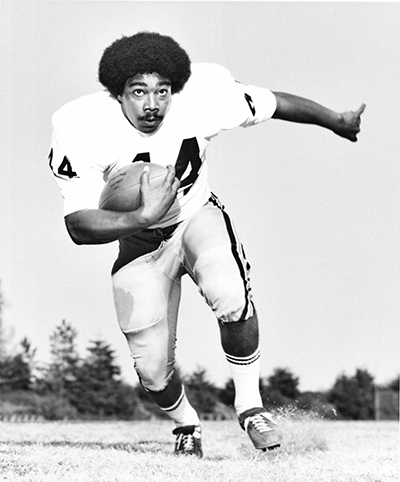 Lawrence D. Hopkins, MD ’77, who starred as a football player at Wake Forest University before earning his MD at the School of Medicine and becoming a well-known Ob-Gyn in the Winston-Salem community, died Nov. 9, 2020, more than three months after suffering a stroke. He was 70.

Hopkins, who was assistant professor of obstetrics and gynecology at Wake Forest Baptist Health, played fullback at Wake Forest in 1970 and 1971. He was the team’s leading rusher both seasons, set the school’s single-season rushing record that still stands and helped lead the team to the 1970 Atlantic Coast Conference championship.

Following medical school, Hopkins completed his residency at Virginia Commonwealth University and served in the U.S. Air Force for two years, rising to the rank of major in the Medical Corps. In 1983, he opened his Ob-Gyn practice in Winston-Salem, where he delivered thousands of babies over the years. 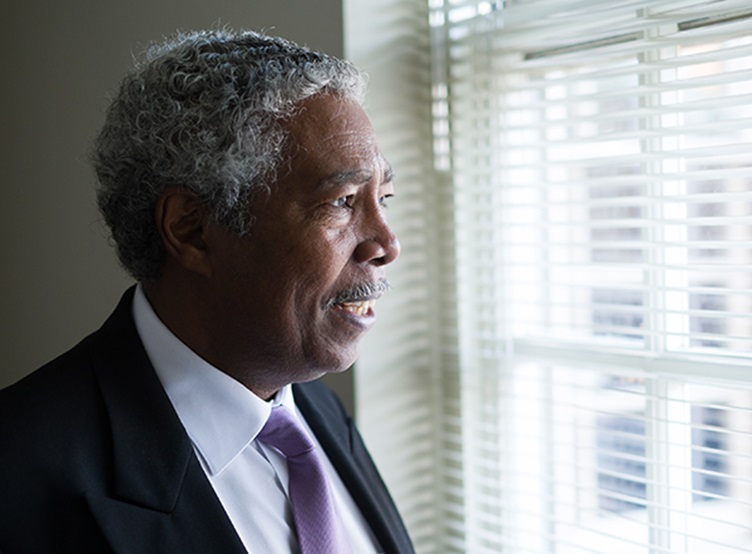 He was a mentor to numerous medical residents and also co-directed the Women’s Health Center, which focused on improving prenatal care and reducing infant mortality. Friends and colleagues noted that he particularly focused his work in poor neighborhoods to help improve the lives of disadvantaged mothers.

“For years and years, he saw women who may not have had the financial means to go to the hospital,” Denise Hartsfield, a district court judge who described Hopkins as her friend and her doctor, told the Winston-Salem Journal. “He didn’t boast or brag. He did what he did.”

Earlier in 2020, Wake Forest University honored Hopkins with its Medallion of Merit, the university’s highest honor, in recognition for his years of service to both the university, which he served as a trustee, and the community.

“There are only a handful of people you meet in this world who are great people, and Larry Hopkins was one of them,” Ed Bradley, one of Hopkins’ former Wake Forest teammates, told the Journal. “I was blessed to know him, and I think we all were better people just for knowing him.”

Survivors include his wife Beth, a daughter, a son and two grandchildren.