Somebody said that it couldn’t be done
But he with a chuckle replied
That “maybe it couldn’t,” but he would be one
Who wouldn’t say so till he’d tried.
So he buckled right in with the trace of a grin
On his face. If he worried he hid it.
He started to sing as he tackled the thing
That couldn’t be done, and he did it!

And as a challenge. 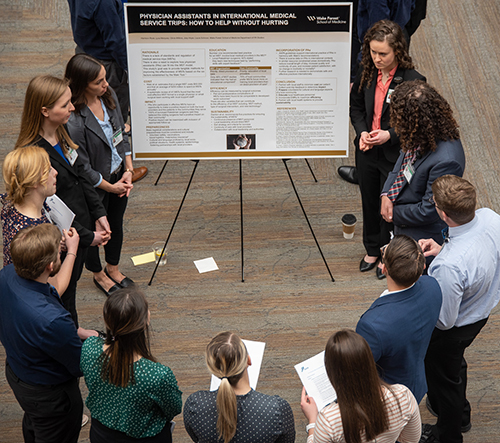 “What prompted you to become a PA?” Derwin asked in his address at the Graduate Project Symposium, held March 2 at Biotech Place in Winston-Salem. “Your patients depend on you. Make sure you can do your best job to care for them.”

Sometimes, he continued, caring and advocating for patients will mean recognizing that parts of the system are broken, and that people are not getting the help they need. It will mean seeing something is just wrong and needs to be fixed.

Fixing those problems won’t always be easy, he said, and at times will seem to be impossible. There will always be people to tell them that “it can’t be done,” but Montgomery implored the students to not back away from the challenge.

The first step, he said, will be to make others aware of the problem. “Things only change when people raise their voices,” he said. “Raise your voice. Be courageous. Stand up!”

Be Part of the Solution

The purposes of the graduate projects are to allow students to become comfortable conducting research through medical literature and to foster a sense of collaboration. In the process, students also tend to discover how much remains to learn about treating and caring for patients and that many ailments and patient populations are seemingly overlooked and in need of advocacy.

They see that there are patients who need someone to stand up and raise a voice on their behalf. 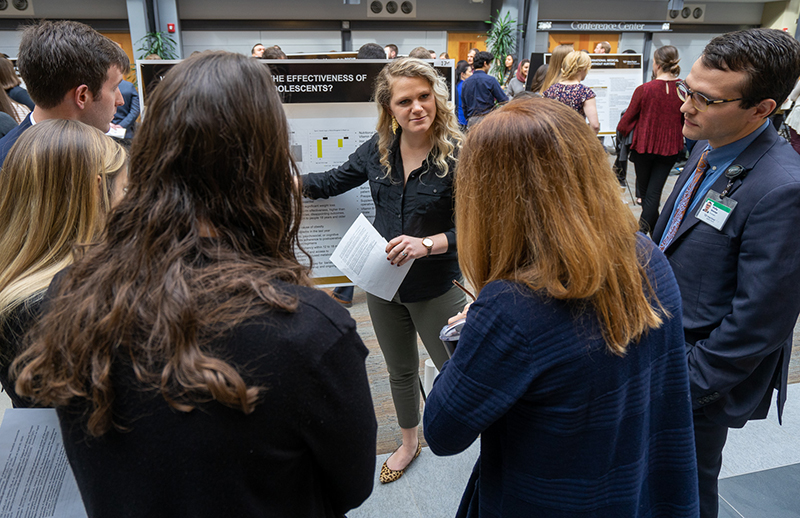 As with projects in years past, this year’s graduate projects focused on a variety of challenging issues. They included barriers to treating opioid disorder, involving children in their own healthcare decisions, and exploring therapies for Parkinson disease patients.

Although the topics and findings varied, a similar thread ran through all of them. Through their projects, the students seemed to answer Montgomery’s challenge.

“We have to be willing to be a part of the solution,” said Lindsey Mitchell. Her group studied the barriers to treatment of opioid disorder. They found that a variety of non-medical constraints – financial, educational and social – were preventing effective treatments from being used to their potential.

Mitchell added that her team discovered that they can make a difference, simply by educating their classmates. “We can really play a significant role.” 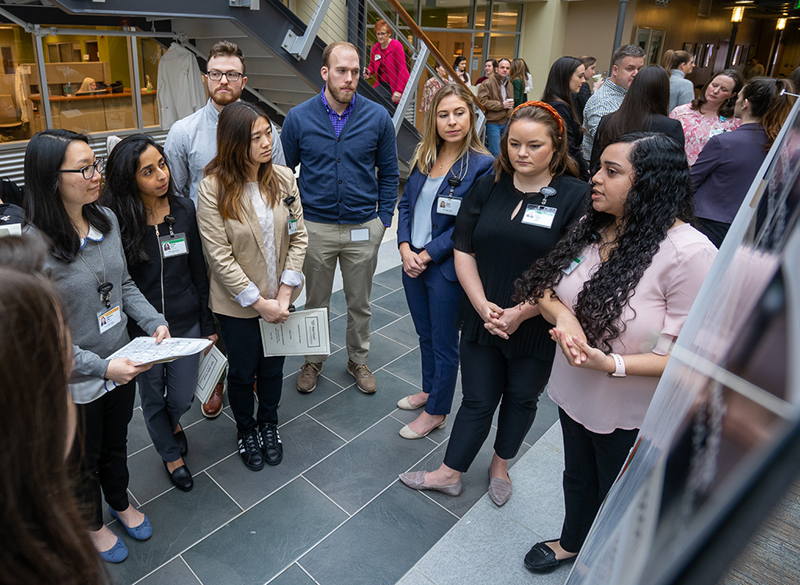 Ellie Parsons, one of Mitchell’s research partners, said that Montgomery’s call for courage resonated with her. “We can’t just wait for someone to say exactly what we need to do,” she said. “We need to be curious and willing to put in the work.”

“A lot of these patients don’t have a voice,” Jounuzaj said. “They are in social isolation. So just speaking up, advocating for them, recommending what’s best for them, is important.”

Clare Hayley, whose group researched strategies for shared decision making with pediatric patients, said she learned that treating patients means focusing on them. “With shared decision making, it’s putting the patients’ experience and values at the center of care,” she said. “Making sure we’re not just taking our experiences into the room, but seeing the patient for who they are.”

This year’s PA students began working on their graduate projects nearly a year before Montgomery gave his address to them, but it was almost as if they were inspired by his words. When they graduate and become practicing PAs, the students will be charged with helping people, Montgomery said. “You will have to do the work,” he continued, warning that the work will often seem difficult and the task insurmountable.

But it’s work that must be done to improve the lives of the people they are caring for and treating. And if the challenge ever seems to great, Montgomery repeated Guest’s words to inspire them to press on.

Just start in to sing as you tackle the thing
That “cannot be done,” and you’ll do it.