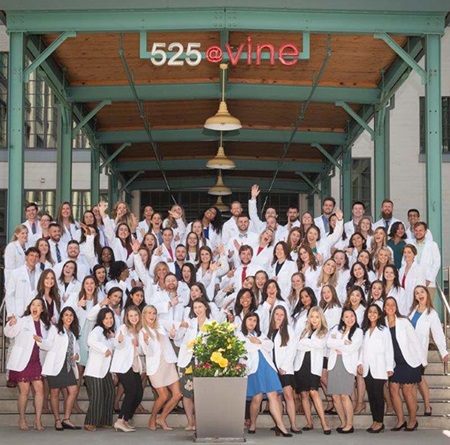 “Although they are receiving a white coat, they don’t deserve it,” he said. “Not yet.”

Like many other PA and medical schools, the Wake Forest PA program places tremendous value on bestowing white coats to first-year students.

“As medical providers, patients have faith and confidence that we are committed to their well-being,” continued Dr. Ober. “The white coat is a symbol of that, a message to patients that says, ‘You can trust me.’”

That trust is something that cannot be given. It has to be earned. And although PA students receive their white coats early in their first year, Dr. Ober wants to make sure they understand what they need to do to earn it.

‘It makes you feel stupid’

Traditionally, the Wake Forest PA program’s White Coat Ceremony takes place in late June, after students have completed an intense month of anatomy and physiology coursework. By that time, it should be clear to students that they have a lot to learn.

But Dr. Ober drives home the point by reading “Knots,” a poem by R. D. Laing. The poem begins with these lines:

Fortunately, there is more to medicine than knowledge, as Dr. Ober points out in the next part of his address to students.

After humbling students, Dr. Ober reassures them. “There is more to life than knowledge,” he says.

To help him make that point, Dr. Ober turns to an old friend, whom many of the students might remember from their childhoods: Winnie the Pooh.

He read a passage in which Pooh and Piglet marvel at how clever Rabbit is.

“Yes,” said Piglet, “Rabbit has Brain.”
There was a long silence.
“I suppose,” said Pooh, “that that’s why he never understands anything.”

“There’s more to the PA profession than factual knowledge,” he continued. “There’s a humanistic, caring, compassionate side.”

To conclude his message at the White Coat Ceremony, Dr. Ober reminds the students of the human side of their work. 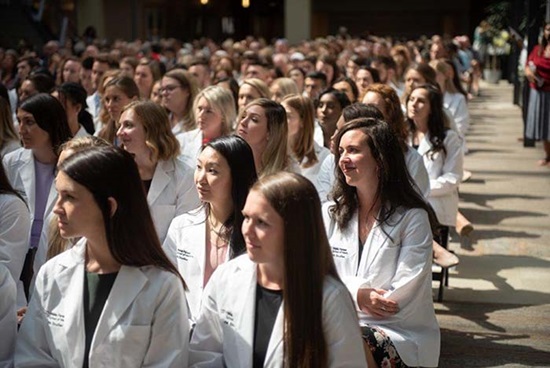 He quotes from an article written by a physician, recounting a situation in which he is treating a young woman. The woman, just 36 years old, dies, and the doctor has to inform the family, including the patient’s two young daughters.

The article’s climax comes when one of the daughters begs the doctor to try again to save her mother.

She said words that made 6 years of medical school, residency, and late nights too numerous wither. “Give mommy more medicine. She’ll get better, but you have to give her more medicine, please.”

At the end of the article, the doctor takes off his white coat and throws it away.

“That one doesn’t work anymore.”

Having taken the audience on an emotional roller coaster, Dr. Ober offers a sobering message that encourages the students to take seriously the garment they are about to receive and everything it means.

“I want that message to stay with them as they go through PA school and on to their careers,” he said. “Every time they put on their white coats, I want them to remember this.”

To the casual observer, the White Coat Ceremony might resemble a graduation, or a formality as the students transition into PA school.

But to Dr. Ober and the rest of the faculty at the Wake Forest PA program, it’s much more than that. The goal of his presentation is to ensure students understand the gravity of the moment. “This is more than a free coat with handy pockets,” he said. “It carries symbolism that’s really important.”

He also wants students to appreciate the responsibility they are accepting, and that they are part of a select few who can have an important impact in their communities.

“Not just anyone can do this,” Dr. Ober’s message to the students concluded. “You’re fortunate to have the ability to do some good in the world, and help people.”