A New Chapter A common goal unites the Class of 2021

The Wake Forest PA program’s Class of 2021 is defined by more than numbers.

Numbers do offer a snapshot of the class. For instance, the average age is 25.4 years. Average healthcare experience is 3,112 hours. The class consists of 17 men and 73 women, representing 138 colleges and universities and 18 states. 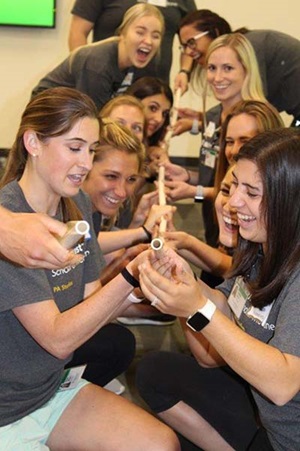 But there is so much more than that.

Each member of the class is an individual, with unique differences and backgrounds that make them who they are. One student is named for a character in a Disney film. Another is in a band, with music published on iTunes. Another has different-sized feet.

Whatever differences and distinct individual traits they have, all of the students are united in the common desire and passion to become a PA.

Like every class before them, the students that make up the Class of 2021 followed different paths that led them to enroll in the Wake Forest PA program. “Some are coming straight from undergrad school and always knew they wanted to be a PA,” said Traci Streit, academic curriculum coordinator at the Winston-Salem campus. “Others have had previous careers in healthcare.”

One student who followed a circuitous path to PA school is Keith Meinecke, who is studying at the Winston-Salem campus. “I had a calling to be a PA,” said Meinecke, who spent several years working for an orthopedic device company. While he enjoyed that job, he knew his heart was in clinical work. “It’s a perfect fit for my personality.”

That team effort is central to the inquiry-based learning experience at the Wake Forest PA program. The didactic year is very much a team effort, as students will need to work together to complete it.

The challenging nature of the first year will being the students together, and they will need to lean on each other for support. “They’re going to have periods when they’re excited, and periods when they’re freaking out,” said Rebecca Moore, distant campus coordinator at the Boone campus. “It’s just hard.”

Streit stressed that the faculty and staff are on the students’ side, dedicated to ensuring they make it through the year successfully. “We are invested in the success of all the students,” she said, pointing to the faculty’s open-door policy as students work through the challenges of the first year. “We truly care about each and every one of them as individuals. They are the reason we’re here.”

As difficult as the curriculum is, the inquiry-based learning approach is also what draws students to the Wake Forest PA program. Meinecke said it was one of the reasons Wake Forest was his top choice of schools. “It’s an opportunity to learn from my classmates, and also teach a little bit,” he said.

During the very first month of classes, students got a taste of how tough the next 11 months will be. 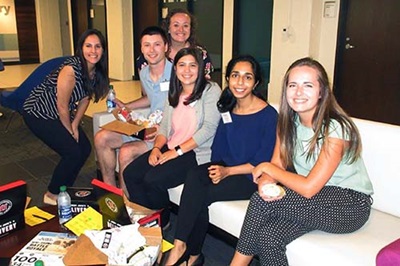 “They call this month ‘trauma block,’” said Jennifer Petrone, a student who studies at the Boone campus. “It’s sheer trauma attempting to digest an entire detailed anatomy and physiology course in three-and-a-half weeks.”

Despite its difficulty, or perhaps because of it, the experience has built a class spirit among Petrone and her classmates. “Most of us have never worked this hard at anything. It has caused feelings of sadness, frustration, and at times hopelessness,” she said, adding that the shared experience has brought her class together. “We’ve become close, very fast.”

Petrone and Meinecke agree that having classmates and faculty to turn to during the first few weeks has been extremely helpful. “I have experienced an outpouring of warmth, acceptance, and support from every single student I’ve encountered as well as Wake Forest faculty and staff,” said Petrone.

“It’s a really good group of people,” added Meinecke. “Everyone works hard, works together, and helps each other.”

As they advance further into their didactic year, the Class of 2021, like the classes that have come before them, will be defined less by their numbers and individual backgrounds, and more by what they accomplish together.

It’s a process that Streit, Moore, and the rest of the faculty never tire of witnessing.

“They all have chapters in their lives up to this point that have created them as individuals,” Streit concluded. “It’s fun to see them create this next chapter together.”