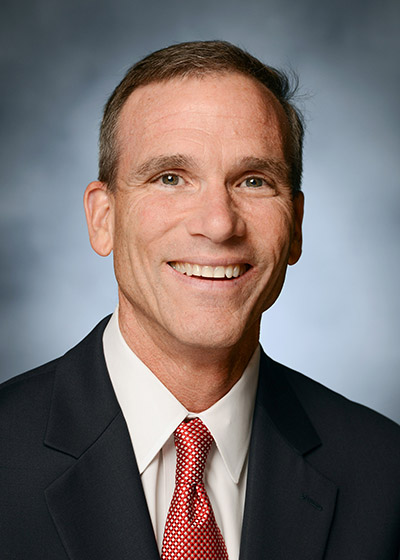 Early in the COVID-19 pandemic, Chris Simmons found himself in an unfamiliar situation: working from home, with extra time on his hands. It might be a good time, he decided, to go back to school.

Simmons had spent three decades in accounting and corporate finance. But as his management duties had expanded, he had begun overseeing biomedical research for RTI Health Solutions, a nonprofit research institute based in Research Triangle Park, North Carolina. He often found himself wishing to know more about the processes he was managing.

“I understand, generally, what we do, but I don’t have a deep understanding of the why,” Simmons says.

He found an ideal program close to home: Wake Forest University's online Master’s in Clinical Research Management. He started in January 2021. “I’m learning things that I’m able to apply the next day,” he says. “It’s making me better at my job of leading this organization.”

The Path to Accounting

In a way, Simmons is following in his mother’s footsteps. Kay Simmons had worked as a secretary while raising Chris and his brother Chuck in Charlotte. Once Chris went off to college, she did too. In her mid-40s, she got a degree that took her into banking and real estate.

Simmons was less settled about his own academic path. At North Carolina State, he tried several majors before choosing accounting. What swayed him was a charismatic professor who made the role of keeping books sound fascinating and fun. It opened a gateway into the wider world of business, in which accounting was a means of learning how different companies made money and keeping score of their successes or failures.

Working for several accounting firms, starting with KPMG, he discovered that his passion was helping startup businesses find financing and grow. “Trying to figure out how to put together the business plan and chart the path for the business was loads of fun to me,” Simmons says.

Lessons From the Startup World

Startups, in turn, brought Simmons back home to North Carolina. After five years in Atlanta, he found a thriving entrepreneurial culture in North Carolina’s Research Triangle. He helped several high-tech and biotech firms raise money before he joined one himself: a promising startup called Cogent Neuroscience, which developed chemical compounds to mitigate effects of brain damage.

As vice president of finance, Simmons helped raise two rounds of venture capital, negotiated deals with pharmaceutical companies and began early preparations for taking the firm public. “We were all millionaires on paper,” Simmons recalls.

Instead, he learned a hard lesson about the precariousness of the startup world. Financing dried up in the recession that followed 9/11, and the company shut its doors.

Simmons decided it was time to leave startups behind and work for an established firm. At RTI, he found the best of both worlds: a 40-year-old nonprofit that was starting up a new business unit.

From Finance to Clinical Research

RTI was created in 1958 as an organization where the three universities that form North Carolina’s Research Triangle could conduct joint research and has evolved into an Institute that conducts research and development primarily for the federal government. As local pharmaceutical and biotech industries blossomed, it saw an opportunity to work for commercial clients. It established RTI Health Solutions in 2000.

Simmons came aboard three years later to lead finance and operations support, and to help meld the small group of individuals into a business within a business. Simmons brought a commercial mindset to supporting the business, working with the management team to instill a sense of urgency to the culture that was not as necessary in government work. The keys to making these changes and making the business successful, he learned, were communication and teamwork.

Over the 18 years since Simmons has been there, RTI Health Solutions has grown to 360 people in 10 offices worldwide. It’s conducted more than 6,600 projects on the development, commercialization and safety of drugs, vaccines and medical devices.

It’s helped clients meet requirements from regulators such as the U.S. Food and Drug Administration and the European Medicines Agency. Today, it’s doing what Simmons calls “front-page work”: monitoring the safety and effectiveness of COVID-19 vaccines.

What he likes most about the work is helping people. “It’s not just about making money or making the most money,” he says. “You get to see it up close and personal, as these medicines impact people and improve their lives or save their lives.”

Back to School for Front-Page Work

Simmons’ duties have grown with the company. He’s expanded from finance to operations to research, where he oversees eight practice areas. He has worked to inform himself by reading proposals and quizzing researchers. But, he says, “I always felt a little guilty about taking their time to try to educate me.”

At Wake Forest, he’s filling in those educational gaps. The program covers practical issues he deals with every day, such as project management, quality control, study design and statistics. It’s flexible enough to fit around his work schedule — allowing him to start in January instead of September. He’ll take five semesters and finish in August 2022.

His courses aren’t just theoretical, he says. Students learn from one another as they debate front-page problems, such as the pros and cons of rapid COVID-19 testing.

Above all, he finds that he’s communicating better with researchers. In a recent meeting, he listened to an epidemiologist analyze a new report on COVID-19. Says Simmons, “To actually understand maybe two-thirds of what they were saying was a big leap from eight or nine months ago.”

Explore Opportunities in the Booming Field of Clinical Research Management

More than ever, the COVID-19 pandemic has increased public awareness of clinical research and spotlighted the expanding range of opportunities in the field. Whether a student’s background is in medicine or business, Wake Forest University’s online Master’s in Clinical Research Management can provide them with the practical knowledge needed to manage these complex projects.