Multidisciplinary academic research group, based primarily in the Department of Neurology.

The HIRREM Research Team at Wake Forest University School of Medicine is a multidisciplinary academic research group, based primarily in the Department of Neurology, pursuing scientific evaluation of the use of HIRREM (High-resolution, relational, resonance-based, electroencephalic mirroring), including effects and possible mechanisms, for a variety of symptoms and conditions. 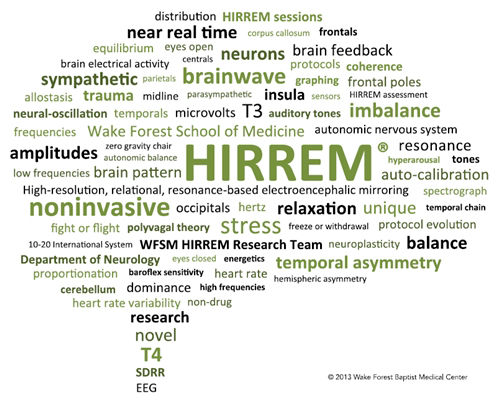 High-resolution, relational, resonance-based, electroencephalic mirroring (HIRREM®, Brain State Technologies, Scottsdale, AZ) is a noninvasive, closed-loop, acoustic stimulation neurotechnology.  Scalp sensors monitor brainwaves, and software algorithms translate specific frequencies into audible tones of varying pitch in real time.  These are immediately mirrored back via ear buds, allowing the brain a chance to listen to itself, or to “look at itself” in an acoustic mirror.  Such rapid updating regarding its own pattern, and resonance between the acoustic stimulation (tones) and oscillating brain networks supports the brain to auto-calibrate, to self-adjust, to relax, and to re-set what have become stuck stress response pattern, as with a musical instrument tuning itself.  The brain pattern is typically observed to shift towards improved balance and often reduced hyperarousal, with no conscious, cognitive activity required.

The HIRREM research program is housed in the Department of Neurology, but it’s a team effort, with contributions from many collaborators.

The brain is the organ of central command that controls the body’s response to trauma or threat, whether the trauma is physical or non-physical.  This unique organ manages the survival (stress) responses that are facilitated by the autonomic nervous system including the sympathetic (fight or flight), or parasympathetic (freeze or withdraw) state.  The brain also has plasticity, meaning that it can change and adapt its pattern of function to meet anticipated needs.  Repetitive or cumulative trauma, or a severe event, might result in persisting activation of an autonomic response, i.e. sympathetic dominant physiological state, or overall hyperarousal of the autonomic nervous system.  These physiological changes can result in symptoms such as insomnia or anxiety.  If these stress responses become chronic, they may contribute to disease states such as hypertension. 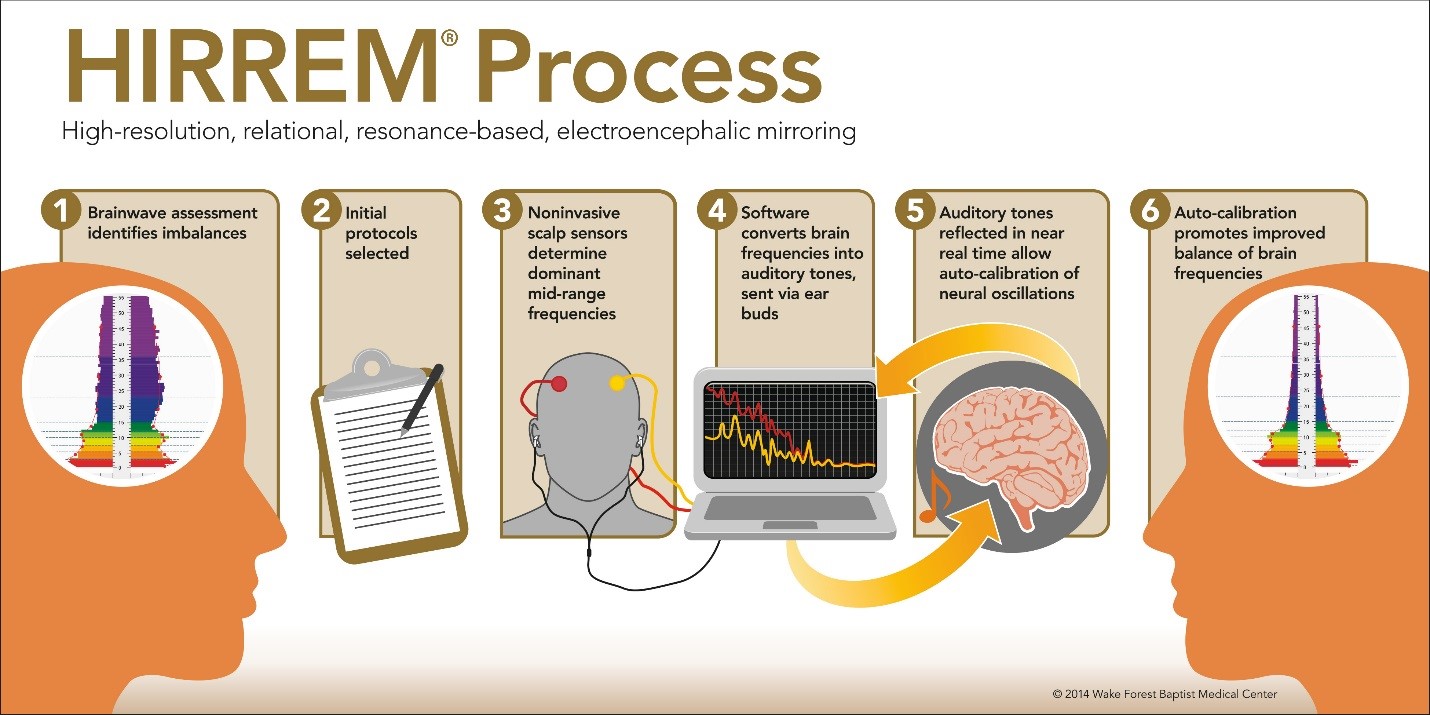 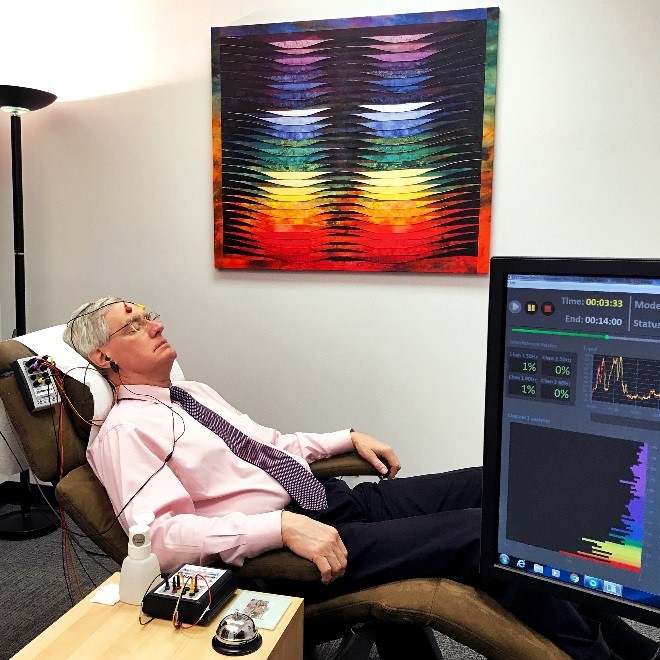 The HIRREM intervention is currently administered as a series of in-office sessions with the recipient sitting or reclining in a comfortable chair.  A session is made up of a number of protocols addressing different scalp/brain locations, some done with eyes open, some with eyes closed.  The number and length of sessions varies between specific research studies, but the goal is to complete sessions within 2-3 weeks.  A course of HIRREM sessions is a process, not an event.  Integration of changes, and accompanying shifts in symptoms may continue to occur for weeks or months after completion of HIRREM sessions.  Because they might interfere with the HIRREM process, or negate changes made during a course of HIRREM sessions, alcohol, and other recreational drugs are to be avoided during and for at least 4 weeks after completion of HIRREM sessions.  HIRREM is not a medical device and is not intended to treat, cure, heal, or diagnose any disease, mental illness or symptom, and individual results and duration of effects may vary.

Over 500 participants have been enrolled in clinical studies as part of the HIRREM Research Program. The use of HIRREM in these studies was associated with reduced symptoms including insomnia, depressive mood, stress, and anxiety, as well as improved autonomic function manifested by improved measures of heart rate variability and baroreflex sensitivity.  There was also improved network connectivity on whole brain rest MRI scans in a cohort with symptoms of military-related traumatic stress.  Additional clinical trials are underway, and publication of results is continuing.

The HIRREM research facilities now include a data collection room, and 5 rooms to administer the HIRREM intervention.
Skip Social Links