Alzheimer’s disease (AD) is a multifactorial chronic neurodegenerative disease characterized by cognitive impairments and synaptic failure. With the rapid growth of the aging population, incidence of 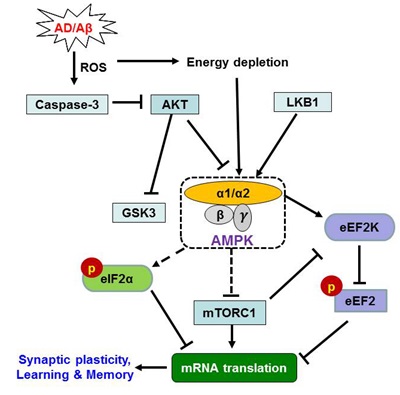 Alzheimer’s disease  is rising worldwide, becoming a global threat to public health and potentially a new epidemic for the 21st century. Unfortunately, no interventions have been discovered to either slow the progress of Alzheimer's, and clinical trials have not succeeded in identifying disease-modifying strategies. The research in our lab focuses on understanding of the molecular signaling mechanisms underlying pathophysiology of the disease, thus providing insights into identification of novel therapeutic avenues and/or diagnostic biomarkers.

Down syndrome (DS) is one of the most common forms of intellectual disability and is caused by trisomic repeat of chromosome 21. Currently, there are no pharmacological treatments that improve cognitive deficits in those individuals. Of note, several genes encoded on chromosome 21 that are overexpressed in DS are also implicated in Alzheimer's disease. 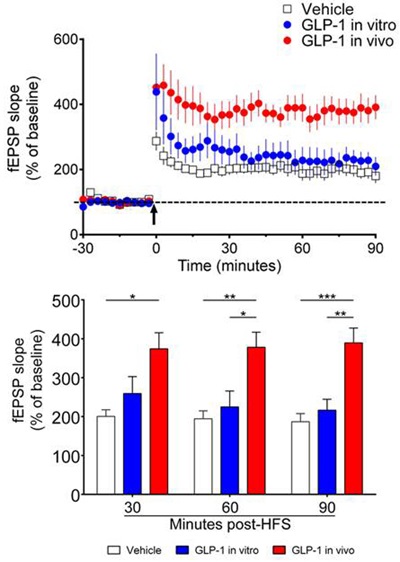 Consistently, most people with DS develop typical AD brain pathology by age 40 and show symptoms of Alzheimer's disease, such as dementia, in their 50s or 60s.

Glucagon-like paptide 1 (9-36) or GLP-1(9-36) is the cleavage product of the insulinotropic hormone GLP-1 (7-36). Originally GLP-1 (9-36) was considered as a "bioinactive metabolite mainly because of its lack of insulinotropic activity and low affinity for the GLP-1 receptors. However, mounting evidence demonstrates that GLP-1 (9-36) possesses important biological functions. For example, we previously shown that GLP-1 (9-36) treatment improves memory and synaptic plasticity impairments in AD model mice. Most recently, we have shown that systemic administration of GLP-1 (9-36) enhances hippocampal long-term synaptic plasticity (Day, 2017), as shown in the left figure.


Currently we are investigating whether GLP-1 (9-36) treatment is able to alleviate cogntive deficits and synaptic failure in a mouse model of DS.