Thirteen Syndrome: A Case Report and Review of the Literature

Horizontal gaze abnormalities have a variety of etiologies, including lesions to the abducens nucleus/paramedian pontine reticular formation (PPRF), medial longitudinal fasciculus (MLF), or a combination of the abducens nucleus/PPRF and MLF. The latter was initially described as a one-and-a-half syndrome by Dr. Fisher and comes from the gaze palsy representing “1” and the internuclear ophthalmoplegia representing “1/2”1. A unilateral lesion to the PPRF and/or abducens nucleus results in impaired ipsilateral gaze and preserved contralateral gaze while the one-and- a-half-syndrome results in impaired ipsilateral gaze plus impaired adduction of the ipsilateral eye with contralateral gaze. Abduction of the contralateral eye is preserved but exhibits nystagmus1,2. Additionally, there are a spectrum of related disorders that involve damage to additional cranial nerve nuclei/fascicles/nerves, such as cranial nerves 5, 7, and/or 8 in addition to a gaze palsy or one and a half syndrome. A curious method of nomenclature has arisen building on the “one and a half syndrome”, such as “eight-and-a-half syndrome”, so named because the affected patient exhibited a one and a half syndrome in addition to cranial nerve seven palsy (1.5 + 7 = 8.5). This system of naming, which has far more teaching value than practical application, has resulted in a number of reported syndromes, and we add to this list by reporting a patient with “13 syndrome”.

A 72-year-old right-hand dominant woman with a history of poorly controlled hypertension presented to Wake Forest Eye Center as a referral for a chief complaint of intermittent, horizontal, binocular diplopia. At presentation, she was found to have left upper and lower facial weakness. Her ocular alignment showed esotropia of the left eye in primary gaze, and she preferred a left head turn. She had normal right gaze but had a left gaze palsy with neither eye being able to move past midline (Figure 1). No ptosis was present, and pupils were normal without an afferent pupillary defect. In the left eye, the patient had 13 mm lagophthalmos with gentle closure which decreased to 8 mm with forced closure and a positive Bell’s phenomenon. The patient had marked decreased corneal sensitivity as well as significant punctate epithelial erosions of only the left eye due to exposure keratopathy but no pain or irritation. Additionally, she had subtle decrease to soft touch and pinprick of the left upper and lower face compared to the right. She first noticed diplopic symptoms three months prior when being admitted to the hospital for a left pontine intraparenchymal hemorrhage with intraventricular extension secondary to malignant hypertension requiring IV nicardipine drip. 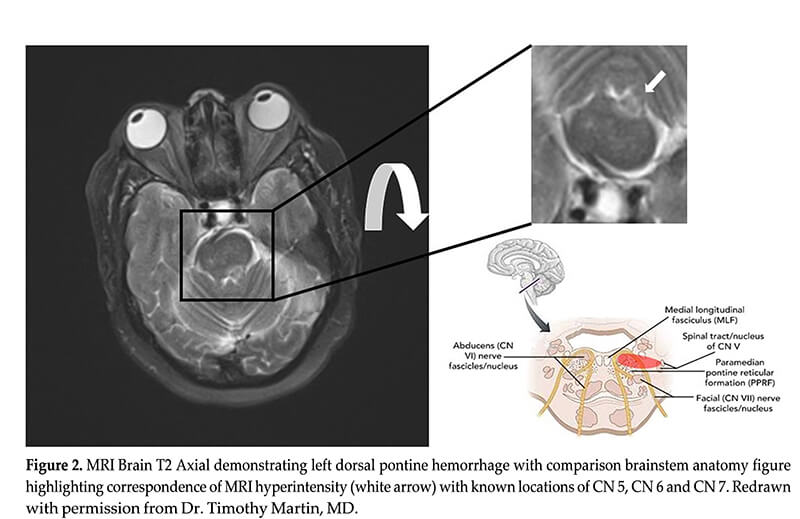 This case is unique in that it is believed to be the first described incidence of what we term thirteen syndrome: the combination of left gaze palsy (representing “1”), CN5 palsy (corneal and facial sensation defect), and CN7 palsy (upper and lower facial weakness). There has been a recent reported case of eight-syndrome consisting of ipsilateral gaze palsy and facial nerve palsy5, but none demonstrating the addition of a trigeminal nerve palsy as seen in this case. As such, this case expands the known spectrum of pontine-cranial nerve disorders to include thirteen syndrome.

This case also serves as an important lesson in the utility of a comprehensive neurologic and ophthalmologic physical exam paired in the setting of suspected CNS lesions. When considering the patient’s positive exam findings of a left gaze palsy, facial weakness, and decreased corneal and facial sensation, a working knowledge of neuroanatomy localizes the patient’s lesion to the left dorsal pontine region demonstrated on MRI. Furthermore, this example of a patient with unilateral neurologic deficits also serves as an important teaching point regarding the clinical manifestations and physical exam findings of brainstem lesions. It is traditionally taught that the hallmark of brainstem lesions are ‘crossed findings’, or sensory/motor deficits that manifest on one side of the face in conjunction with deficits occurring on the contralateral body. This example of thirteen syndrome serves as an important example of an exception to this rule when comparing the patient’s MRI findings with known locations of brainstem tracts. With this patient’s lesion localizing to the dorsal pons, it notably spares the spinothalamic and medial lemniscus tracts (located just ventral to the lesion) as well as the corticospinal tract (located even further ventral to the lesion)6. In sparing these long tracts within the brainstem, this case serves as a useful example of the fact that the lack of crossed findings on neurologic exam does not preclude brainstem pathology.