The prevalence of factors predisposing to acute kidney injury (AKI) — older age, diabetes, obesity and atherovascular disease — has increased exponentially. This study analyzed the national trend in AKI incidence along with related health care costs and mortality. Using the National Inpatient Sample database, we analyzed individuals age 18 years and older who were hospitalized from January 2000 to December 2014 and had AKI (ICD-9: 584.9) as the principal discharge diagnosis. Longitudinal differences in the total number of hospital discharges, mean length of stay (LOS), rate of in-hospital mortality, and inflation-adjusted cost related to AKI versus the calendar year were assessed using general linear model (GLM) for testing trend of linear regression. To account for single year viability, the generalized linear model (GENMOD) was used to estimate the linear trend for five consecutive year groups, each of which contained three consecutive years. The total number of discharges with the principal diagnosis of AKI increased by 27,811 cases per year and the mean LOS per hospitalization decreased by 0.2 days per year (p<0.0001, GLM and GENMOD). The AKI-related in-hospital mortality rate decreased by 62% per year (p<0.0001, GLM and GENMOD). The mean charges per AKI hospitalization increased by $915 per year and the mean aggregate charges (the ‘‘national bill”) associated with all AKI hospitalizations increased by $1,000,000,000 per year (p<0.0001, GLM and GENMOD, adjusted for inflation). In spite of declining hospital LOS and mortality in patients with AKI, the per patient hospitalization charge increased.

The diagnosis of acute kidney injury (AKI), regardless of etiology, is associated with serious immediate complications (e.g., fluid overload, electrolyte and acid-base abnormalities, coagulopathy, and death)1 and long-term sequelae (e.g., proteinuria, de-novo chronic kidney disease [CKD], de-novo end-stage kidney disease [ESKD]).2-4 The prevalence of factors predisposing to AKI — older age, diabetes, obesity and atherovascular disease — has increased exponentially over the past decades.5-7 In parallel with these trends, the incidence and prevalence of AKI is expected to change.8

Acute kidney injury epidemiology has been studied in several cross-sectional and longitudinal studies9-12, many not spanning the United States territory10 and focused on AKI incidence in patients admitted with specific diagnoses13 or in patients admitted to the intensive care unit (ICU).9,11,14,15 Epidemiological data for AKI incidence and its relative effects on mortality, hospital length-of-stay (LOS) and charges spanning contemporary medical care are scarce. This study analyzed all national inpatient data between 2000 and 2014 from the Healthcare Cost and Utilization Project’s (HCUP) National Inpatient Sample (NIS) to identify cases of AKI as a principal discharge diagnosis, using International Classification of Diseases, Ninth Revision (ICD-9) codes. Temporal trend in the rate of inpatient diagnosis of dialysis- and non- dialysis requiring AKI was analyzed as 1) at-risk AKI rate (i.e., number of AKI cases of the total discharges), and 2) population-based AKI rate (number of AKI cases per million person-years). The relative effects of AKI on mortality, LOS and charges over the same time span were also evaluated.

Statistical analysis Continuous variables were described in terms of their means (standard deviation) and compared using t-tests when appropriate. Categorical variables were described as proportions and compared using the χ2 test. We log-transformed mean age at hospitalization to accommodate data that were expectedly right-skewed and used Mallow’s Cp to assess model fit. To quantify the change in risk of AKI among hospitalized patients per year, we fit a univariate logistic regression model with calendar year as the primary predictor and AKI as the primary outcome. We calculated population incidence rates for AKI in the US from 2000 to 2014 by dividing the number of discharges with AKI by the US population in each year.18 Incidence estimates were stratified by sex and age for subgroup investigation. We used linear regression analysis to evaluate the associations of AKI with hospital length of stay (LOS) and healthcare charges. With data from 2000 as a reference, we used multiple logistic regression models to determine the odds of AKI and corresponding in-hospital mortality for each year included in the study. All data was analyzed using Stata 11.2 (StataCorp, College Station, TX). 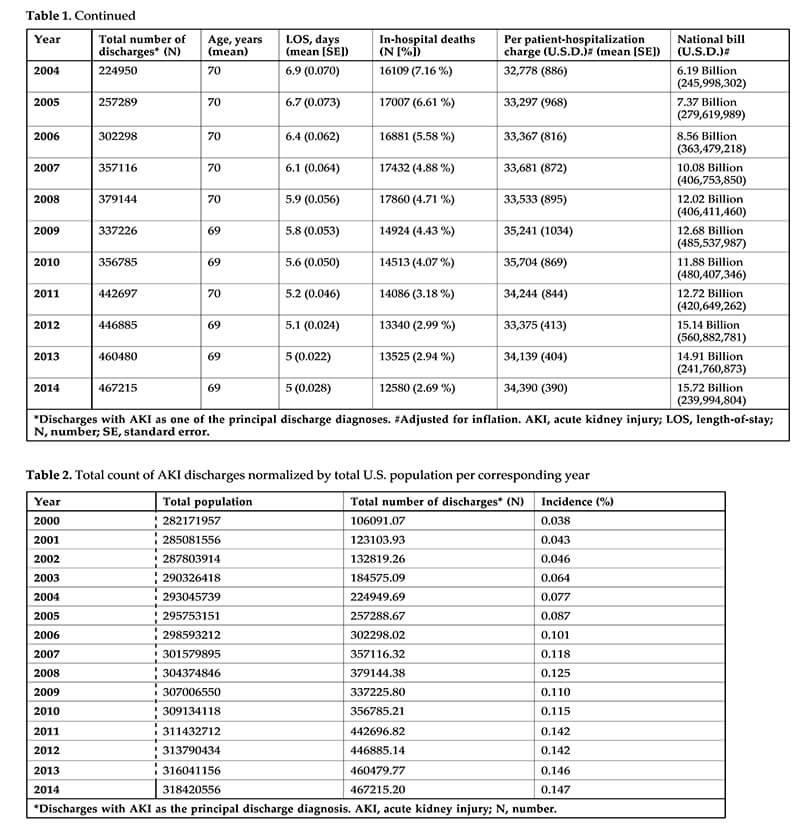 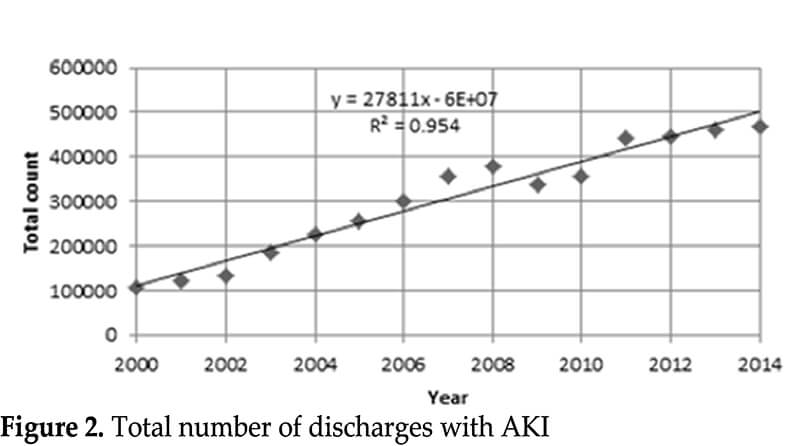 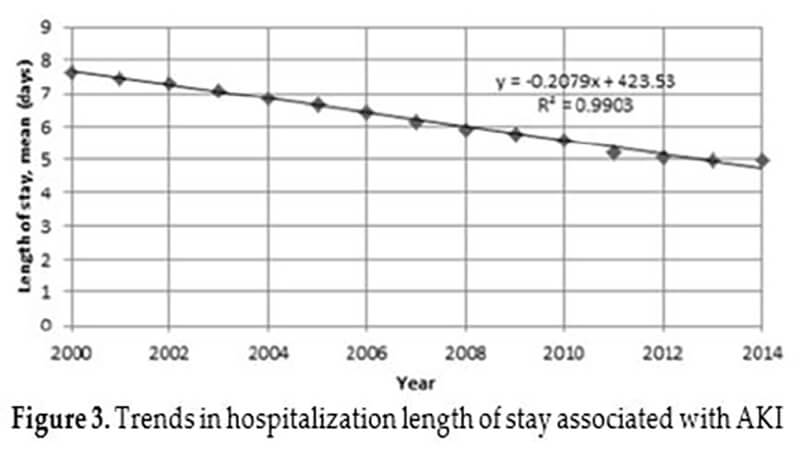 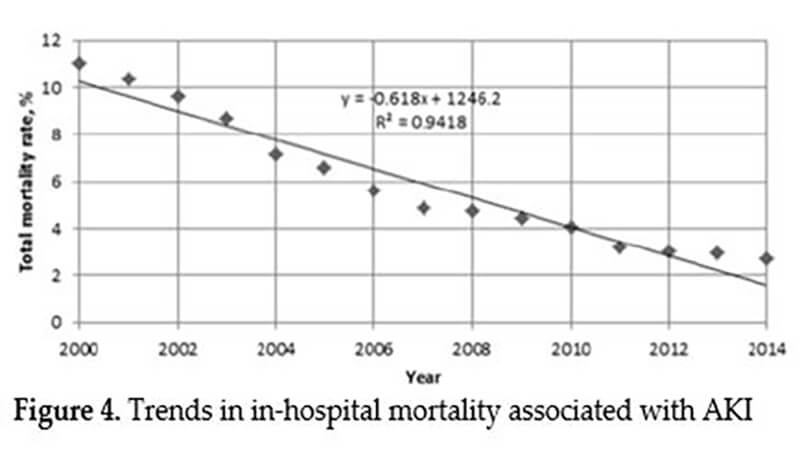 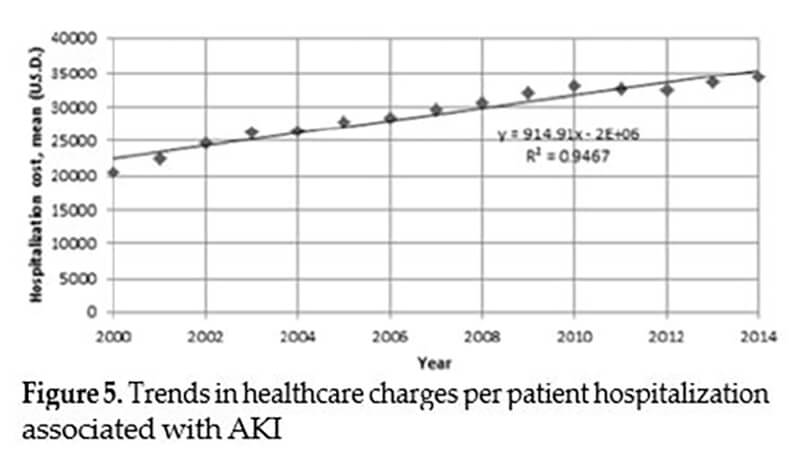 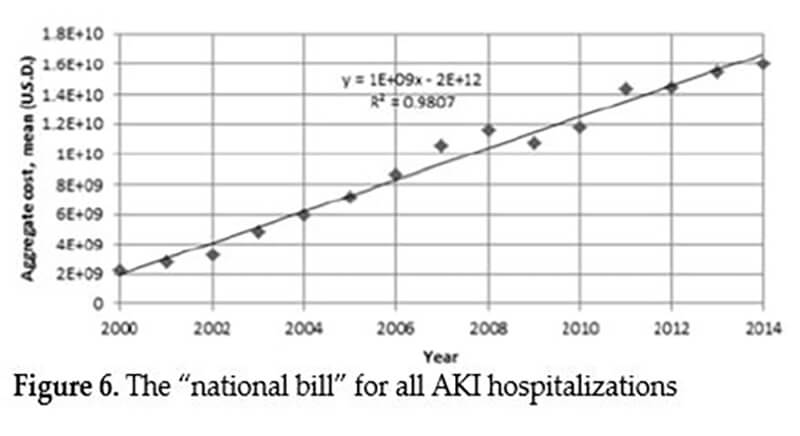 This study analyzed contemporary trends of dialysis- and non-dialysis-requiring AKI epidemiology from a large national inpatient database. Our results show that the total count of hospital discharges with a diagnosis of AKI has increased significantly over the years, and that these differences remained significant even when adjusted by total U.S. population. Several prior studies examined longitudinal trends in AKI epidemiology between as early as 1988 and as recently as 2014, with a range in longitudinal analysis of 2-11 years.12,19-23 Waikar et. al. reported a rising incidence in dialysis- and non-dialysis-requiring AKI per 100,000 population in hospitalized patients between 1988 and 2002 on a population level in the United States from 1988 to 2002.20 Similar results were later reported in a study cohort limited to Northern California between 1996 and 2003.21 Hsu et. al. showed that the population–level incidence rates of dialysis-requiring AKI between 2000 to 2009 increased by an average of 10% per year, with a more than doubling in the number of deaths associated with dialysis-requiring AKI.22 On the other hand, Amin et. al. observed an opposite trend in crude AKI incidence among patients hospitalized with acute myocardial infarction from 26.6% in 2000 to 19.7% in 2008, corresponding to an overall adjusted decline of 4.4% per year.13 These discrepant trends suggest that AKI may be occurring more frequently overall but less commonly in certain subgroups of patients (e.g., those with acute myocardial infarction). Notably, none of the aforementioned studies that reported population-based trends of AKI incidence had adjustment for U.S. population.

Possible explanations for the rise in AKI incidence throughout the years may stem from changes in AKI awareness, recognition, monitoring, or changes in coding practice. Separated by the date of release of consensus definitions for AKI including the Risk, Injury, Failure, Loss of kidney function, and End-stage kidney disease (RIFLE) criteria in 2004, Acute Kidney Injury Network (AKIN) criteria in 2007, and Kidney Disease Improving Global Outcomes (KDIGO) criteria in 2012, there seems to have been a spike in AKI incidence following the inclusion of AKI definition criteria, driven largely in part by less severe AKI.24 In addition, the sensitivity of administrative codes for AKI has increased over time with implementation of AKI criteria.25

Similar to our analyses, one study evaluated AKI incidence rate normalized by total regional population. Kashani et. al. used electronic data from Mayo Clinic Hospital to study the temporal trends in the population incidence rate of AKI between 2006 and 2014 in Olmsted County, Minnesota; AKI incident cases were normalized by all adult Olmsted County residents. In contrast to our report and previous studies20-22, the authors found a relatively stable incidence of AKI, from 473 cases per 100,000 person-years in 2006 to 497 cases per 100,000 person-years in 2014. An important difference between our study and the study by Kashani et. al. is that the current report analyzed national AKI incidence over a 15-year period while Kashani and colleagues analyzed AKI incidence in restricted region and over a 9-year period.

This study notes that despite a declining hospital LOS and mortality among patients diagnosed with AKI, healthcare costs associated with AKI continually rose and the results did not differ statistically when adjusted by total U.S. population. Many of the previous studies also showed a concurrent decline in AKI related mortality, although this finding has been inconsistent across studies. We speculate that increased recognition and reporting of milder AKI, earlier and more liberal use of acute renal replacement therapy, increased recording of renal replacement therapy use, and financial incentives associated with renal replacement therapy use could contribute to the decline in AKI-related mortality over time.24 Factors responsible for the rise in healthcare costs other than renal replacement therapy include higher use of interventional procedures, presence of a higher number of concomitant morbidities addressed in hospitalized patients, as well as differences in disease reporting and billing over the years. For example, the decision to enter a discharge code is influenced by multiple factors including whether the event is deemed clinically significant or as part of health- care reimbursement. Therefore, this study cannot secure that rising healthcare costs associated with hospital AKI diagnosis are due to the AKI event per se.

Our study has some limitations. Although the NIS is a large dataset, it lacks laboratory measurements, differentiation between dialysis vs non-dialysis AKI and readmission information. Because AKI begets AKI26, a prior episode of AKI (even with recovery of renal function) increases the risk of additional admissions with AKI; thus, the number of AKI hospitalizations or discharges could be inflated without an actual increase in the number of individual patients with AKI per year.