Median arcuate ligament syndrome (MALS) is a poorly understood condition characterized by compression of the celiac artery by a fibrous ligament connecting the diaphragmatic crura. Severe compression on the celiac artery can contribute to abdominal pain, commonly chronic and located in the epigastric region. This clinical vignette describes a 54-year-old woman with a history of sleeve gastrectomy and provoked pulmonary embolism who presented to an outside hospital for recurrent chronic abdominal pain of unclear etiology. On arrival at Wake Forest, the patient was found to have severe lactic acidosis and later imaging findings concerning for MALS. The patient underwent further evaluation with a vascular doppler ultrasound to assess respiratory variation, which aided in evaluating the severity of the impingement on the celiac artery. Given the severity of her debility, the patient was medically optimized before scheduled surgery for the treatment of her suspected MALS.

The median arcuate ligament is commonly cephalad to the origin of the celiac artery, although it is estimated to cross over a proximal portion of the celiac artery in 10-25% of patients (as depicted in Figure 1).1 Severe stenosis of the celiac artery is predicted to affect 1% of patients with imaging findings of MALS.1 In these cases, patients often develop collateralization between the celiac artery and the superior mesenteric artery (SMA) to alleviate the risk for visceral ischemia.2 Unfortunately, these collateral vessels can often induce shunting of blood away from the SMA to these smaller vessels. This form of “vascular steal syndrome” reduces vital blood supply to the gastrointestinal organs that may go unrecognized and lead to chronic ischemia.3 This clinical vignette describes a patient with severe lactic acidosis in the context of unexplained chronic abdominal pain, nausea, vomiting, and syncopal symptoms and was found to have a clinical evaluation consistent with MALS.

A 54-year-old female with a history of sleeve gastrectomy and provoked pulmonary embolism presented to an outside hospital with severe epigastric abdominal pain, nausea, and syncopal symptoms. On arrival at Wake Forest Baptist Medical Center, the patient was afebrile, tachycardic to 121, and normotensive. Labs were notable for lactic acid of 9.8 mmol/L, bicarbonate 12 mmol/L, and anion gap 19 mmol/L. Physical exam upon admission was significant for diffuse epigastric tenderness with radiating numbness reported to her knees bilaterally. The chronic waxing and waning achy upper abdominal pain was most severe post-prandially, with no other well-defined aggravating or alleviating factors from history gathered on positional changes, medications, or nutritional status. Associated symptoms included nausea, vomiting, syncopal symptoms, and intermittent loose, non-watery, non-bloody diarrhea. The patient was aggressively hydrated with lactated ringer solution with slow improvement in her lactic acidosis, yet had persistence of epigastric pain. The patient’s report of persistent leg discomfort led to concern for a vascular etiology and subsequently computed tomography angiography (CTA) revealed impingement superior to the celiac trunk. With concern for MALS, duplex vascular ultrasound was performed to evaluate respiratory variation on arterial imaging (Figure 2). Multiple collateral arteries were noted with turbulence noted in the area of the proximal celiac artery. This patient’s velocities of 247 cm/sec. These velocities reduce to 86 cm/sec with inspiration. Our patient exhibited compression of the celiac artery accentuated during expiration as the median arcuate ligament moved cranially, which was relieved during inspiration. 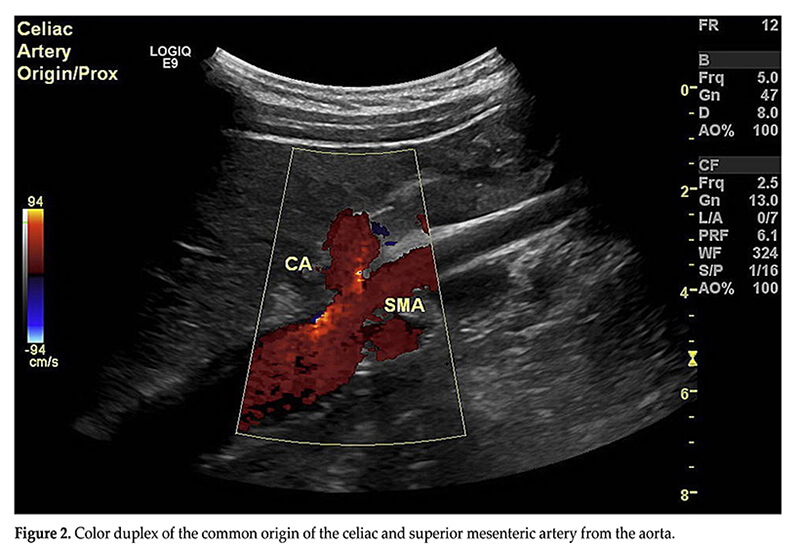 In coordination with the care team, the patient had continual supplementation for her numerous vitamin and mineral deficiencies, including total parenteral nutrition to optimize the patient before later surgical intervention for the treatment of MALS.

This case outlines a complex patient presenting with chronic abdominal pain who required urgent medical care in treatment evaluation of her severe lactic acidosis, which may have been induced by chronic ischemia secondary to MALS. The broad differential for unspecified abdominal pain without concerns on CT imaging includes, but is not limited to: arterial or venous thrombosis, arterial embolism, vasospasm, or extrinsic compression. This patient completed 6 months of anticoagulation for previous pulmonary embolism and was no longer taking anticoagulation. Recognition of MALS as a potential etiology in the diagnostic evaluation of abdominal pain is of growing clinical importance. Increased bariatric surgery incidence leads to a higher prevalence of patients with rapid weight loss: a major risk factor for the development of MALS.4,5 The celiac nerve plexus impingement in MALS can lead to a broad distribution of abdominal pain, such as further hepatic, gastric, splenic, and pancreatic plexuses. Lipshutz et al. first described MALS in 1917 with only a few later cases documented, such as in 1963 and 1965;4,6 interestingly, epidemiologic review of cases revealed higher incidence in females (4:1), notably between the ages of 40 and 60 years old.1

However, challenges in diagnosis include the nonspecific symptoms seen in the triad commonly associated with MALS: epigastric pain, weight loss, and abdominal bruit.2,3 A review per Jimenez found abdominal bruit present in only 35% of patients, with auscultation often difficult due to body habitus.3 Custati et. al found the most predominant symptoms of nausea and vomiting (56% of patients), with other symptoms less prevalent.3 Thorough history and physical exam should precede medical evaluation with blood work, imaging including abdominal ultrasound, with later CTA or doppler ultrasound aid in the diagnosis.1 Doppler vascular ultrasound to evaluate respiratory variation can help determine if compression is clinically significant and may be contributing to abdominal pain.7 Our patient did not have imaging prior to sleeve gastrectomy to discern if she was at increased risk for post-operative complications. Rarely used and more invasive additional testing include gastric tonometry (to determine arterial PaCO2 levels before and after exercise) or a percutaneous celiac ganglion nerve block (may be diagnostic as well as therapeutic).3