There is limited information about the knowledge and beliefs of Arabic speaking refugee women in the United States with respect to women’s health. Understanding beliefs and attitudes among a culturally diverse population such as Arab Muslim refugee women can aid in providing comprehensive care including preventative women’s health issues. Our objectives are to assess the knowledge and beliefs with regard to reproductive health of the Arabic Muslim refugee women so providers can better understand how to provide gynecologic care and health education. Seventeen adult, Arabic-speaking Muslim refugee women living in North Carolina completed a survey in English or Arabic about their knowledge and beliefs relevant to women’s health. The contraception method of choice by the majority was intrauterine device (IUD). Half the women reported that breastfeeding can prevent pregnancy. Only 29% reported that women should start taking folic acid before pregnancy. Fifty percent and 94% of women reported that pap smears and mammograms, respectively, screen for cervical and breast cancer. More than half the women reported they would not or were unsure whether they would have a child vaccinated for human papillomavirus (HPV) at the Center for Disease Control’s recommended age. Understanding the knowledge gaps including beliefs and attitudes among a culturally diverse population and associated cultural factors is valuable to implementing strategies to educate Arabic-speaking refugee women on preventive health.

According to the Refugee Processing Center, in 2017, over 53,716 refugees were admitted to the United States (U.S.).1 Among refugees admitted to the U.S., Arabic was the most common language. The World Health Organization identifies key issues for women’s reproductive health including maternal health, cervical and breast cancer, and sexually transmitted infections.2 Physical and emotional wellness, along with access to healthcare, are foundations for successful resettlement of refugees.3 Many immigrant women are from societies where they have been historically disadvantaged by discrimination. Understanding their attitudes and beliefs about reproductive health can identify their needs and guide healthcare.4

Previous studies demonstrate unmet need for contraceptives among refugee women resettled in Canada, as well as significant differences in cervical screening and mammograms based on immigrant status and cultural background in both Canada and the United States.5,6 Muslim refugees in the U.S. from 2015 to 2018 totaled 23,511 from Arabic speaking countries in the Middle East and North Africa.1 Previous research on barriers to cervical and breast cancer screening among Muslims have identified lack of knowledge about preventive care, language barriers, and gender roles as challenges to overcome.7,8 We seek to assess the knowledge and beliefs of Arabic Muslim refugee women with respect to reproductive health in order to better understand how to provide gynecologic care and health education.

We invited women to attend a health education session at an Islamic Center in North Carolina serving Arabic refugees to complete a survey in their preferred language (Arabic or English) prior to the session. Participation was restricted to Arab Muslim refugee women 18 to 70 years old. The survey questions addressed their knowledge and beliefs about women’s health topics, including closed-ended questions that addressed contraceptive preference, pregnancy preparation, and the purpose of routine types of screenings and human papillomavirus vaccinations (HPV). Participants could mark that pap smears screen for cervical cancer, uterine cancer, ovarian cancer, or fertility. Participants could mark that mammograms screen for lung, uterine, cervical, or breast cancer. Demographic questions were also included. We obtained informed written consent in participants’ preferred language. We calculated response frequencies for the full sample by language in which the survey was completed. All procedures were approved by the Wake Forest School of Medicine Institutional Review Board (IRB# 48327).

The majority (56.3%) of participants reported an intrauterine device (IUD) was their preferred form of contraception (Table 1). Four (26.7%) indicated that folic acid should be initiated before becoming pregnant. Seven (46.7%) participants affirmed that breastfeeding prevents pregnancy. Although almost half (46.7%) of the participants reported that pap smears screen for cervical cancer, most (93.8%) indicated that mammograms screen for breast cancer. Only 7 (46.7%) reported they would have a child in the recommended age range vaccinated for the HPV. Survey completion language responses were not statistically analyzed due to small sample size. The data suggest that English-writing participants may be less likely than Arabic-writing participants to think that breastfeeding can prevent pregnancy and to vaccinate a child for HPV at the age range.

Surveying Arab Muslim refugee women was accepted by the participants. Our survey results indicate that, in the domain of contraception, the majority preferred the use of an IUD compared to other forms of contraception that were surveyed including: contraceptive pills, coitus interruptus, or menstrual tracking. Many reported that breastfeeding could prevent pregnancy. This lends to information for providers to emphasize necessary counseling points. Using lactational amenorrhea as contraception, by women who are amenorrheic, and who are strictly breast feeding their infant for up to 6 months, can have a 98% rate of pregnancy protection. Breastfeeding only, without supplementing her infant for up to 6 months after delivery, have possible 3% and 6% cumulative probabilities of pregnancy by 6 and 12 months, respectively.9 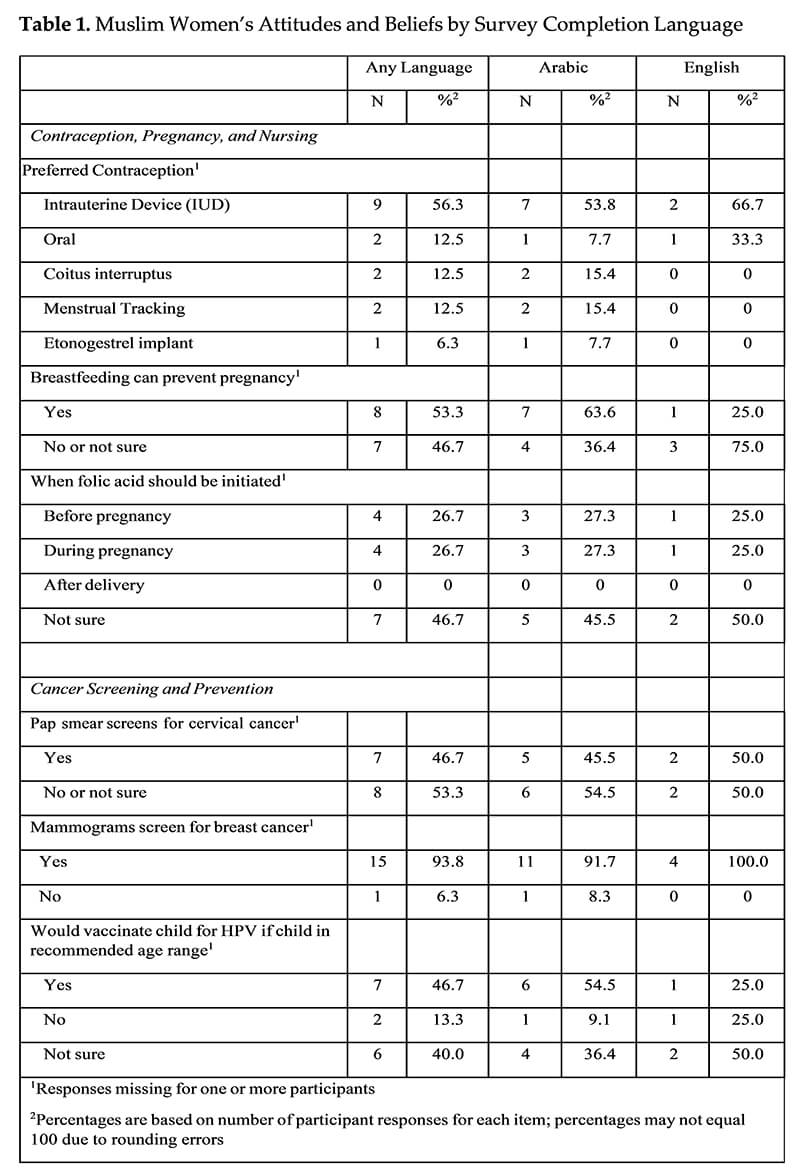 One of the most compelling results from our survey was that almost half of women were not sure if folic acid is needed before (or during) pregnancy. More focused education on preconception care is essential in this population. For cancer screening and prevention, the majority of women did not know that pap smears screen for cervical cancer. The lack of preventive health routinely practiced by Arab Muslim refugee women in their homeland may play a role in how women view this topic. Our survey indicated that the majority knew that mammograms are for breast cancer screening.

Among Syrian refugees, the IUD is the most commonly used method for contraception.10 Many Arab Muslim refugee women pray at least 5 times per day, and bleeding can interrupt prayer. A report in the Middle East commented that contraception associated with spotting or unscheduled bleeding is not preferred.11 Half the participants did not understand the role of folic acid and pregnancy, a standard recommendation in preconception and during pregnancy.12 Consistent with our findings, Ceuleman et al. studied folic acid use during preconception among 17 Arabic-speaking pregnant women (76% Syrian born) with no one using folic acid except one participant who received assisted reproductive therapy.13

Most participants were aware that mammograms screen for breast cancer; few correctly understood that pap smears screen for cervical cancer. Research regarding cancer screening in immigrant Muslim women point to limited awareness of cervical cancer screening among participants.7,14 Women may be reluctant to be seen for gynecologic symptoms, pap smear screen or IUD checks for fear of bleeding following a pelvic examination.15 Study limitations include a small sample size and that some participants skipped one or more questions. Limited education is often correlated with low health literacy.16 It is therefore unsurprising that some of our participants, of which 41.2% had a middle school education or less, have gaps in knowledge about women’s health.

The data does not enable us to evaluate whether there were differences in attitudes between participants who completed their questionnaires in English or Arabic. Furthermore, those who completed questionnaires in English all had a college education, and only one was married or had at least one child. Any potential differences in attitudes between the groups may therefore reflect difference in education and marital/family status.

Family medicine providers should promote education about pre-pregnancy and pregnancy planning, including the need to take folic acid prenatally, among Arab Muslim refugee women. Providing medical advice about women’s sexual health, cervical cancer screening and prevention is necessary. Providers should appreciate the culturally sensitive nature of discussing the HPV vaccine to a population that considers premarital sex unacceptable and may think it is unnecessary. Family physicians should draw upon the cultural knowledge of trusted leaders within the Muslim community to provide culturally and linguistically appropriate education opportunities and next steps for future research.

The authors thank the Annor Islamic Center Board members for allowing us to use the space to hold the group educational sessions.