A previously healthy 18-year-old African American female presented to an outside hospital (OSH) with a one week history of acute-onset visual hallucinations, abnormal behavior, and malaise. Urine toxicology screen was negative, and lumbar puncture demonstrated leukocytes of 72 x 10*3/µL with a monocyte predominance, protein of 70 mg/dL, and glucose of 50 mg/dL. She was admitted to the OSH with concern for infectious meningoencephalitis and was started on ceftriaxone, vancomycin, and acyclovir. These were discontinued following negative cultures and viral PCR studies. During her hospitalization, she was noted to have left hemiparesis. MRI Brain demonstrated increased T2/fluid attenuated inversion recovery (FLAIR) signal within the bilateral thalami extending to the right aspect of the midbrain, hypothalamus, and bilateral occipital lobes without diffusion restriction (Figures 1-2). While specific imaging of the orbits was not obtained, there was no optic nerve enhancement on the contrasted MRI Brain. Magnetic resonance venography (MRV) was negative for venous sinus thrombus and routine electroencephalogram (EEG) was normal. She was transferred to our hospital for further evaluation.

On our initial examination, the patient's eyes opened to voice. She intermittently followed commands but did not verbalize. Her cranial nerves were intact and reflexes were unremarkable. She had weakness in her left upper extremity (4/5) and left lower extremity (3/5) with full strength in the right hemi-body.

The acute change in mentation and autonomic instability suggested a systemic process. Given the lack of response to steroids, plasmapheresis was initiated. CT chest/abdomen/pelvis with contrast was unremarkable for lesions suggestive of malignancy, including ovarian teratoma. 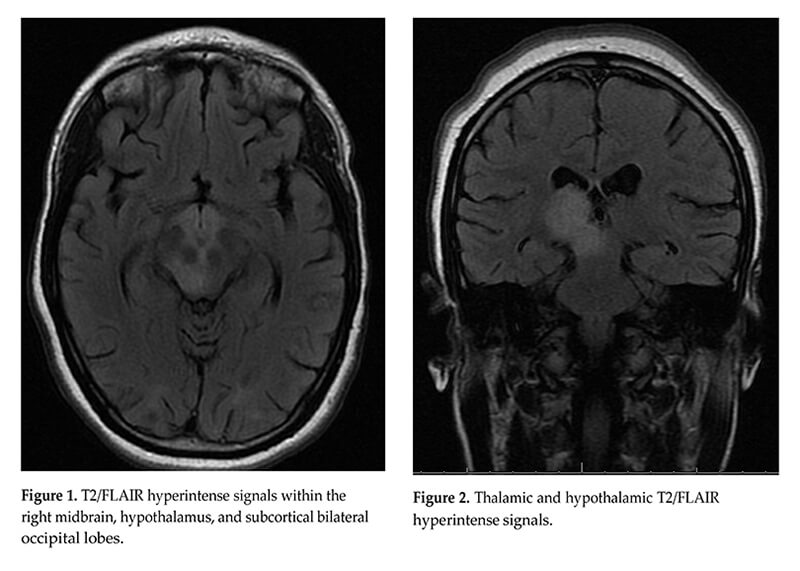 She eventually began to move her left upper extremity to commands but still was unable to move her left lower extremity. MRI of the cervical and thoracic spine was negative for demyelinating lesions. She received a second dose of rituximab two weeks later and was transferred to an inpatient rehabilitation facility. At three-month follow up, her mother reported she was nearly back to baseline, able to converse and perform ADLs independently. Repeat MRI at five-months demonstrated some resolution of the T2/FLAIR signal changes (Figure 3). 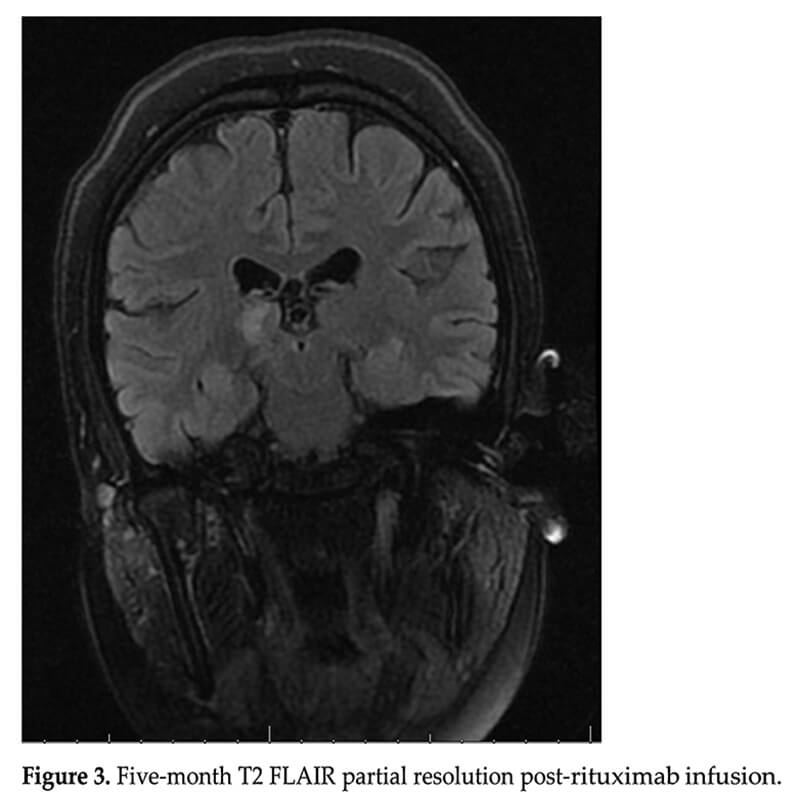 The history was not suggestive of underlying psychiatric co-morbidities or emotional stressors. Drug abuse was less likely due to negative toxicology. Neither the routine EEG nor the continuous video EEG monitoring demonstrated seizures. After initial evaluation, one could obtain a thyroperoxidase (TPO), thyroglobulin (TG), and anti-myelin oligodendrocyte (MOG), anti-Aquaporin-4 (AQP4) antibodies, and an autoimmune panel including Sjogren's syndrome, systemic lupus erythematosus (SLE), and anti-NMDAR antibodies.

Apart from enhancement of the optic nerves, a MRI brain is normal at presentation in up to 84% of patients with NMO6. In this patient, bilateral thalamic and hypothalamic involvement was present on admission with clinical signs of hypothalamic instability throughout her admission. In a retrospective analysis, hypothalamic-axis involvement in anti-AQP4 antibody-positive NMO was frequently observed, with bilateral involvement in 90% of these patients7. This is in accordance with the high expressions of AQP4 channels in this area. Another study speculated that the proximity of the hypothalamic region to the visual pathways typically involved in NMO may explain the occurrence of hypothalamic lesions and dysfunction in some patients8.

Anti-AQP4 antibodies demonstrate a 94-99% specificity for NMOSD9. A link between NMOSD with anti-AQP4 antibody positivity and autoimmune connective tissue disorders has been previously documented3. An array of autoimmune testing for conditions such as SLE, Sjogren’s syndrome, and rheumatoid arthritis were obtained in our patient and should be assessed in NMOSD patients.

NMOSD can present across a broad spectrum and is potentially debilitating. In young women with hypothalamic symptoms or psychosis, NMOSD should be high on the differential with early use of high-dose steroids to prevent long-term disability.