The Weis Lab develops and deploys computational modeling and imaging methodologies to explore the biophysics of cancer, with an emphasis on driving clinical interventions.

Research in the Weis Lab is concentrated in developing and deploying computational modeling and non-invasive imaging methodologies to explore the nature of soft-tissue mechanics in cancer, with an emphasis on driving clinical therapeutic interventions. Research projects focus on the multi-disciplinary study of the multi-scale influences of mechanics in cancer progression and response to therapy, involving the development and validation of imaging-based mathematical modeling approaches that evaluate quantitative parameterization of cancer growth and therapy response properties based on observational imaging measurement data (optical, X-ray computed tomography, and/or magnetic resonance imaging). Utilizing a mathematical modeling framework that incorporates mechanical signaling from the surrounding tissue microenvironment, predictions of the eventual response of cancer to therapy can be made with an overall goal of directing therapeutic intervention.

The Weis Lab employs a mixed experimental/computational approach towards modeling and parameterization of cancer, employing tools of imaging, biophysics, and computational modeling to study cancer progression and response to therapy.

Research spans the length scale of cancer from preclinical in vitro cancer cell and in vivo cancer model systems to translational clinical-based investigations within the scope of three main projects:

It is clear that tissue mechanics is not only a passive indicator of cancer status, but is also active in shaping the growth and response of tumors. We begin with the hypothesis that interactions between cancer and mechanics at the macroscopic level can be described by a coupled reactive-diffusive mechanics system, where tumor cells grow and diffuse in space depending on their mechanical environment. Rather than use this system to simulate tumor growth de novo, the Weis Lab is interested in leveraging rich non-invasive imaging data sources available to make these models patient-specific. This has led to work developing a mathematical approach to integrate quantitative in vivo imaging data into biomathematical models of tumor growth and diffusion in order to predict eventual response to neoadjuvant chemotherapy based on early measurements during therapy. The combination of quantitative data provided by advanced imaging approaches to initialize and guide a mechanistic understanding provided by mathematical models has demonstrated a compelling strategy for these complex evaluations. The approach represents a novel application of biomechanics coupled tumor growth models to the clinically significant problem of patient-specific non-invasive imaging-derived predictive models of tumor response to therapy. 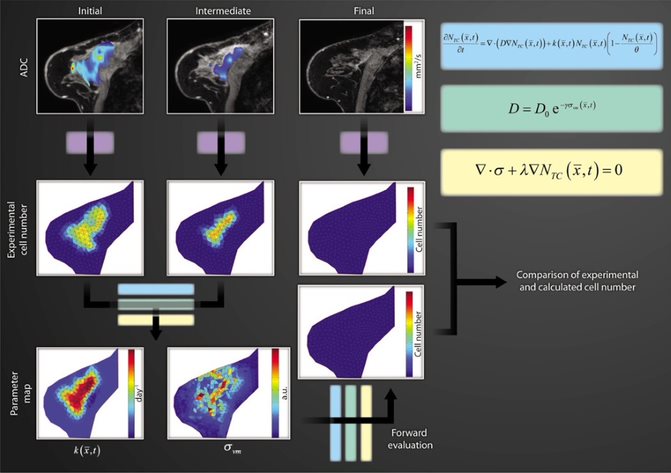 Mechanical investigations within the Weis Lab focus on studying cancer from a tissue-level mechanics and mathematical modeling background to explore tissue-level mechanical stiffness imaging biomarkers in breast cancer. The Weis Lab has developed novel computational methodologies to assess tissue-level mechanical elasticity in breast cancer clinical and preclinical models based on anatomical magnetic resonance images collected before and after the application of a quasi-static mechanical compression. In an extension to the methodology, we have also investigated the use of the method in clinical cancer patients using gravitational excitation as a deformation source to drive model-based estimation of mechanical tissue stiffness markers.

The Department of Biomedical Engineering is uniquely positioned for graduate education and research with a focus on using engineering principles to improve human health. Learn More
×