Madison Redwine knows what racism and discrimination in medicine can do. As a Black woman, she’s seen how it affects people.

“I’ve experienced it as a patient,” the preclinical phase student in the Wake Forest PA program said. “I’ve seen older people in my family not trust the hospital because of things that happened to them or their parents.”

Working as a Spanish interpreter in a hospital in Charlotte, she’s also seen it from the provider side. “I’ve seen so many awful, obviously racist things,” she continued, “but have also seen subtle, offhanded comments that people wouldn’t think twice about, and are very harmful towards people.”

Racial inequity has been an issue that the medical profession, and society at large, has struggled to address for decades. But thanks to the leadership of Redwine and some of her classmates, the Wake Forest Department of PA Studies and its PA program are taking a significant, multi-faceted approach to diversity and inclusion.

According to Sobia Hussaini, Director of Admissions for the Wake Forest Department of PA Studies PA program, the program has been working to improve student diversity for decades.  Since 2016, emphasis has included initiatives to create a pipeline for more minority students, actively recruiting students of color, and establishing scholarships to make PA school more affordable to students of all backgrounds.

“We would be told things like African-Americans are more likely to have diabetes or hypertension, but we wouldn’t ever talk about why that would be, or the social determinants of health.  ... I think a lot of things that happen are just complete oversights. Once you’re thinking about it, you’re more aware of it, and you can teach about it better.”

Those efforts, Hussaini admitted, have been mostly in the background. But in 2020, with the deaths of George Floyd and Breonna Taylor, the topic of racial inequity came into stark focus. It became clear to the Wake Forest Department of PA Studies administration that their efforts up to that point weren’t enough. “We realized we needed to do better,” she said.

L. Gail Curtis, Wake Forest Department of PA Studies Chair, echoed Hussaini’s comments. “We have made attempts to improve racial equity and diversity and inclusion, but they haven’t been enough,” she said. “For too long, diversity has been viewed as an issue that needed to be dealt with by the very people who are not being treated equitably. It’s not going to work that way, because the problem is societal.”

The Wake Forest Department of PA Studies has had a sort of awakening, which was brought on by the students themselves.

Redwine said that she and several of her classmates took note of racial inequities in the very courses they were taking. “We would be told things like African-Americans are more likely to have diabetes or hypertension, but we wouldn’t ever talk about why that would be, or the social determinants of health,” she recalled.

As a minority student, Redwine said that the absence of that kind of discussion has the effect of excluding her and others like her. She doesn’t attribute that to outright racism, but instead to a lack of understanding how words and messages can impact people. “I think a lot of things that happen are just complete oversights,” she said. “Once you’re thinking about it, you’re more aware of it, and you can teach about it better.” 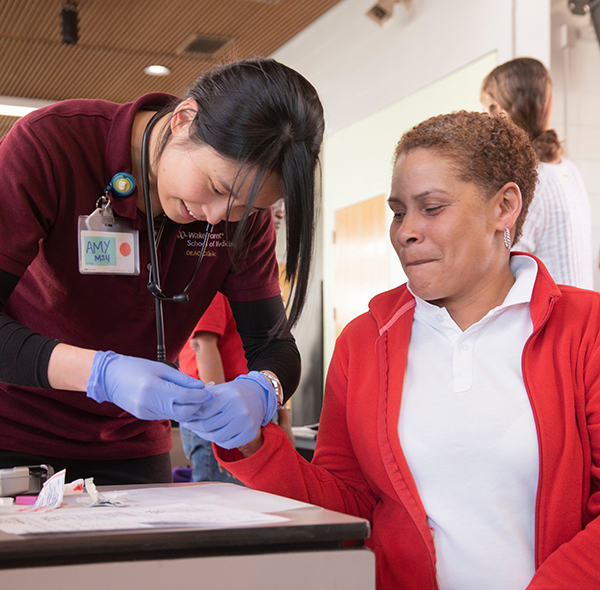 The problem extends far beyond minority students feeling excluded, Redwine stressed. Without learning about the causes of racial inequities in medicine and the social determinants of health, students are less prepared to give care to their future patients.

“Next year, we’re going to go into our clinical rotations, and ultimately into practice, and be in situations we aren’t completely prepared for,” she continued. That, in turn, continues the cycle of minorities being mistreated by the medical profession, and growing minority distrust in healthcare.

With a desire to finally stop that cycle, Redwine and several other minority students began bringing increased attention concerning these issues to the Wake Forest Department of PA Studies leadership. Their efforts centered on identifying and bringing current racial issues to the administration’s attention.

“We would let them know when there were missed opportunities to discuss issues or acknowledge disparities and differences in minority healthcare,” she said. It didn’t take long for many white students in the program to support the effort. “There were white students who were concerned they weren’t getting this education, either.”

The grassroots campaign Redwine and her classmates started paid off, and the Wake Forest Department of PA Studies took action.

“We have made attempts to improve racial equity and diversity and inclusion, but they haven’t been enough. For too long, diversity has been viewed as an issue that needed to be dealt with by the very people who are not being treated equitably. It’s not going to work that way, because the problem is societal.”

“We asked open-ended questions and wanted the students to guide the discussion,” said Hussaini. “Faculty were encouraged to participate, but really to be there as listeners.”

Redwine said she and her classmates appreciated the openness of the listening sessions. “They were vulnerable, honest conversations,” she recalled.

Even the most well-intentioned listening session would be empty if no action was taken. The Department of PA Studies created a racial equity task force that includes students, faculty and staff, and charged this task force with specific actions the department and program could do to make improvements. The task force created a specific plan to address three main areas: curriculum, recruiting & admissions, and diversity & inclusion training.

The recruiting and admissions subgroup was tasked with ensuring the makeup of the student body, staff and faculty, reflected the community and society. “We heard in the listening sessions that representation is important to the students,” Hussaini continued. “We wanted to make sure everyone is thinking about bringing in a diverse range of candidates in our admissions and hiring practices.”

Finally, the third taskforce subgroup is leading an effort to offer training for faculty, staff and students. The training includes topics like active bystander and unconscious or implicit bias training. The goal of this training is to ensure that no one – students, faculty, or staff – is ever made to feel unwelcome or excluded, even if it’s unintentional.

Although the listening sessions and subsequent formation of the racial equity task force were only a few months ago, it’s already beginning to show results. Redwine said she is excited to see very clear forward progress as the department and program work to improve. “I’m very happy with the progress that’s been made,” she said, adding that the efforts are grounded in a genuine, commitment to improvement. “It’s been consistent the whole time, which has been so awesome.”

“I am really proud of our department and program and really happy that they listened honestly.”

The immediate results of the task force’s efforts will be that students’ experiences and education will be better, but it’s the long-term results that are especially important. Gayle Bodner, Wake Forest PA program Vice Chair, said the initiatives will help create better PAs.

“We are trying to graduate professionals that not only know how to practice medicine, but also practice culturally sensitive, inclusive patient care,” she stated. “And we’re working to produce providers that can support each other.”

Curtis believes the initiatives will also benefit the communities where the students eventually enter practice. “If we have more minorities practicing medicine, and more PAs who understand how to provide care for minorities in our patient population, we’re going to have better outcomes,” she said.

According to Curtis, the most important reason for the department to undertake real change was that it is simply the right thing to do. “Rather than having racial equity as one of our goals, it needs to be threaded through every goal,” she said. “It’s time that we really make sure we’re impacting the future of medicine in a positive way.”