A Message of Inclusion Dr. David McIntosh delivers an important keynote at the Graduate Project Symposium

As he addressed the crowd of first-year and second-year PA students, faculty and guests gathered in the Biotech Place atrium, Dr. David McIntosh knew what the audience was thinking. 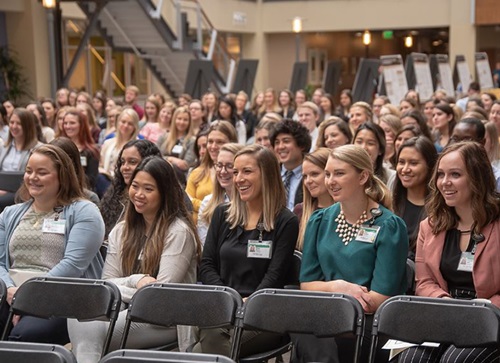 He was giving voice to what many in the audience had thought to themselves moments earlier. Somewhat apologetically, he went on to list the other credentials – straight, middle-class, right-handed – that put him squarely in the majority of nearly every demographic category.

Given his title as the chief diversity and inclusion officer at Wake Forest Baptist Health, McIntosh is used to unspoken skepticism. But that didn’t deter him from delivering his keynote message at the PA Class of 2019 Graduate Project Symposium on March 4, 2019.

It was, he said, an important message. “Any time we have an opportunity to share a message about inclusion, it’s important,” Dr. McIntosh said before the event. “Especially when it has to do with practicing medicine. It’s central to building trust with patients.”

Trust was a central theme to the presentation, and McIntosh’s first step was to build trust with the audience through some self-deprecation. “I went to a liberal arts college, on a tennis scholarship,” he joked.

Trust, McIntosh argued, is especially critical for people working in the medical profession, as it leads to better, more equitable care for everyone. “Trust will allow you to be a good PA,” he said.

To start to create that trust, he said in his speech, you first have to acknowledge the biases and inequities that seem to permeate our society. He described several studies that demonstrated how women and people of color have an uphill battle when it comes to how they’re treated, even by their equals. 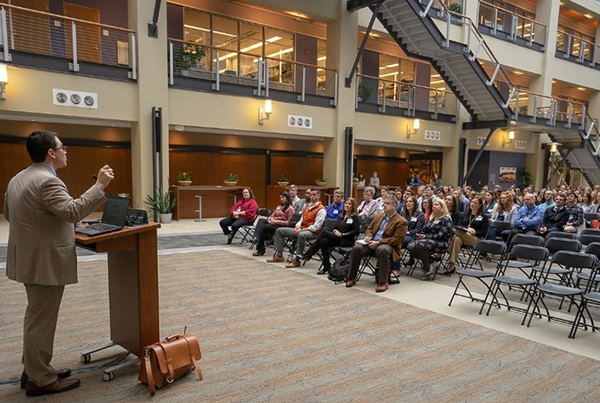 One of the studies he cited found that female scientists were compensated an average of $13,000 less than their male counterparts. The most interesting part of the study, McIntosh said, is that it included male and female department chairs who were making the compensation decisions.

In other words, it’s not necessarily the conscious effort of majority groups that limit minorities’ opportunities. It’s the unconscious work of everyone. “We do this to ourselves,” McIntosh lamented.

The reason, he went on to say, is the environments we grow up in. “We’re born into this world without stereotypes or biases,” he continued. “These things are taught to us through our parents, through school, through the media.”

Without thinking, we all view people using the biases we’ve learned over the course of our lifetimes. We’re especially susceptible to it when we’re doing repetitive tasks, such as when PAs are examining multiple patients in a day.

“When we do something over and over again, and we’re not really thinking about it, that’s when biases come out,” warned McIntosh. “I encourage you to slow down your thinking. Understand that every patient has their own story. Everyone has a unique journey to get to where they are.”

He implored the students in the audience to be curious, ask questions, and to find out what their patients’ stories are. That will help to change the way medicine is practiced, making it more equitable for all people.

McIntosh concluded by emphasizing the responsibility the students in the audience will have upon graduation. “Because of your roles as healers, you will be thought of very highly,” he said. “How you use that power is up to you.”

Dr. McIntosh’s message hit home with the students in the audience. Several said that it was an important message for them to hear as they prepare for careers in medical service.

Haley Fisher (’19) viewed the speech as a learning opportunity. “I even took notes, because I think what he had to say was really important,” she said. She believes the message McIntosh shared will help her work with patients and understand where they are coming from.

“We all have things that set us apart,” she continued. “It’s important for all of us to learn how we can better integrate our patients into our lives and integrate us into their lives.”

Sarah Barrett (’19) agreed, saying that the speech will serve as a reminder to her to not pre-judge patients. “Each patient you encounter has their own story,” she said. “You have to be open to listening to that story because that’s going to help your care.”

Jake Cimolino (’19) was impressed with the authenticity of Dr. McIntosh’s speech and said that helped drive home the message for him. “It’s one thing to talk the talk, but if you walk the walk as well, it makes the message all the stronger,” he said.

“What I’ve learned through different rotations, you’re going to see people from different generations and backgrounds,” added Clay Carter (’19). “You have to truly be able to adapt to that and to treat them as a person. A lot of that is understanding where they came from.”

While Dr. McIntosh’s presentation was a memorable portion of the event, the main purpose of the Graduate Project Symposium was for the students to present posters showcasing their master’s projects. The culmination of 14 months of work, the symposium offered students the opportunity to share their research with faculty and first-year students.

Bryan Geigler (’15), MMS, PA-C, an assistant professor in the Department of PA Studies, helped to evaluate posters and said there were certain points he was looking for. “The content of the poster is important, making sure it’s professionally written and accurate,” he said.

More important, he continued, was gauging the collaboration of the student groups. “I’m looking at how the group works as a team to answer the questions and defend the main points.”

Unsurprisingly, the topics the different student groups chose to research were varied, ranging from nutrition to substance abuse to medical marijuana.

The Graduate Project is a required element of the PA program curriculum, but students also saw it as an opportunity to supplement their education. “We don’t learn a lot about diet in PA school, so this was a good way to educate ourselves,” said Cimolino, whose group studied the effects of a diet low in saturated fat. “It’s complicated. Everyone is different, and there’s no one-size-fits-all solution.”

Other students, such as Fisher, who researched medical marijuana with Monika Gonzales (’19), chose their topics for personal reasons. “I grew up in the mountains of Western Pennsylvania, where the opioid epidemic is rampant,” she said. “I’ve lost a lot of people in my hometown, and I feel personally motivated to figure out if there’s something that can help this issue.”

Students also mentioned that the experience of researching the topics will help them as they transition into careers as PAs. “We’ve learned to critically evaluate information, and understand what’s important to your patients, and deliver it to them in a way that’s understandable,” said Barrett.

While an academic event, the Graduate Project Symposium is at its heart a celebration of the hard work and talents of the students in the program.

PA program director Sue Reich, MPAS, PA-C, said every year she’s marvels at what the students accomplish. “Every year I’m more and more impressed at how brilliant these students are,” she smiled.

She added that beyond her role as an evaluator, she derives personal satisfaction from the event.

“It’s so much fun to watch them do this every year.”