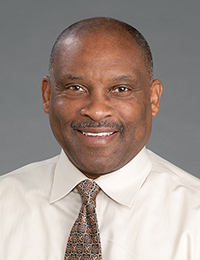 Even before he was a PA, Robert Wooten has always believed that it was a central duty of healthcare professionals to advocate for patients who can’t advocate for themselves.

His time on the ground only reinforced this belief. After graduating from the Wake Forest PA program in 1981, he took a challenging first job. He worked at a clinic on the south side of neighboring Greensboro, an area the state had deemed underserved.

“There was nothing in school that prepared me for the social aspects of the population that I worked with,” Wooten said. “People couldn't afford medications. People didn't want to go into the hospital when they needed to because they were uninsured.”

These conditions were amplified during the height of the AIDS epidemic. By then Wooten was working in Forsyth County’s STD and TB clinics, where he spent significant time quelling fears and dispelling myths about HIV to the clinics’ predominantly black and Latino patients.

It was a necessary responsibility at a time when black and brown people disproportionately died from the disease.

In both settings, Wooten’s patients’ fear of healthcare institutions, as well as their incomplete knowledge of how to navigate the healthcare apparatus, forced him to wear different hats. He regularly bounced between the roles of PA, social worker, preacher, teacher, or counselor to ensure patients received adequate care.

Difficult as they were, these strained conditions were not new to Wooten. During his childhood in Brooklyn, he easily ascertained how poor access to healthcare plagued his community’s quality of life.

“You went to clinics where you would get there at eight in the morning, and just to get a vaccination, you may be there until one o'clock in the afternoon,” he recalled.

All of these experiences led him to conclude that PAs must prioritize diversity and inclusion if healthcare as a field was going to live up to its oath of doing no harm. After ascending through various leadership roles, he eventually became President of the AAPA where he elevated conversations regarding cultural competency in healthcare to the national scale.

Now, as the recently appointed Chair of the AAPA’s Diversity, Equity, and Inclusion (DEI) Commission, Robert Wooten is ready to leverage these experiences into real change that will ensure patients everywhere receive the care they deserve.

Wooten and his ten fellow commissioners are now meeting regularly to review AAPA policies, some of which stretch back thirty years, to identify revision opportunities through a DEI-focused lens.

“We’re trying to foster a culture that says if you’re going to put together policies, then you need to make sure that DEI is in your policy, and that it speaks to the whole, and not to one particular group there,” Wooten added.

The Commission has also joined in the creation of the AAPA Strategic Plan to ensure that DEI principles are embedded throughout the whole organization. Wooten is excited about the potential impact that large-scale, in-person dialogues at the AAPA’s annual conference can have on people’s willingness to embrace DEI.

Already Wooten’s chairmanship has generated promising signs of making progress beyond the walls of the AAPA and in the classrooms where PAs are getting educated. He and some of his commissioners were recently asked to advise a PA school about implementing DEI principles into their curriculum.

These sorts of requests are a pleasant surprise for Wooten, who remembers when conversations about racial disparities in care weren’t mainstream.

Despite these wins and the progress that his term promises, Wooten acknowledges that no single chairman’s term can compel PAs and their educational institutions to make disparities in healthcare outcomes a vestige of the profession.

“I think it's going to take beyond my term to really see the true fruits of what this commission does because it takes a while to change your culture,” Wooten said. “I think the true measure of success is going to be just in our policies, and in the future. But it's going to take a little while.”

However, the fact that he may not be in office as chairman to see the full outcomes of his tenure isn’t of concern to Wooten. He said there’s very little personal glory attached to this position.

“I don't really ever look at any personal gain from me, because it's really not about me,” Wooten concluded. “What I try to do is to help make sure that the people that I serve are going to get the best possible care that can be given.”