A Lens of Racial Equity

From the mistreatment of black soldiers during the Civil War, to the Tuskegee study in 1932, to the disproportionate effect of COVID-19 on African-American communities, American healthcare has a long history of racial inequity.

A problem of that magnitude is not solved quickly or easily. But having PAs who are well-trained in matters like diversity and social determinants of health might just speed up the transition to equitable healthcare.

That’s the hope behind the effort to make diversity, equity and inclusion a central part of the Wake Forest PA Studies program curriculum.

“Our goal is to thread representation throughout all courses in the curriculum,” said Ethan Stonerook, assistant professor, who’s helping to lead the initiative. “By graduating PAs who provide equitable care, we can correct some of the historical ills of medicine, which have led to poor outcomes for people of color.”

To meet that goal, the program’s faculty and administration is taking a comprehensive look at what is being taught and what needs to change, according to Stonerook. But the catalyst for that effort didn’t come from the administration or the faculty.

The initiative actually began in November 2020, when the current second-year students were in their didactic year. “They raised concerns that our curriculum centered on white patients and didn’t represent the experiences of other patients very well,” Stonerook recalled. “It was very brave of them to bring that to our attention.”

Their initiative led to the creation of the Racial Equity Task Force, which took on the task of integrating diversity, equity and inclusion into the Wake Forest PA Studies program curriculum.

The students also made it clear that when it comes to diversity, the Wake Forest PA program wasn’t quite living up to its mission of serving under-served populations. “People have implicit biases, and the healthcare system itself has structures that reinforce harm,” said Stonerook. “By recognizing that, we can train PAs who can correct those biases.”

One of the goals of the curriculum initiative is to facilitate more conversations about race and social determinants of health during instruction, according to Andrea McKinnond, associate professor and chair of the Racial Equity Task Force.

“From personal experience, I can tell you that conversations of race and medicine that should have been facilitated were not occurring,” said McKinnond, who graduated from the Wake Forest PA Studies program in 2015. “That probably was because of our faculty not being comfortable with those conversations.”

She added that the problem may also stem from the low rate of students of color being enrolled in the program, a long-term problem that the Racial Equity Task Force is also addressing.

But McKinnond said the task force is currently focused on the more immediate issue of the first and second year curriculum. “That’s where most of our learners acquire their knowledge of how to treat patients they’re going to encounter after graduation,” she continued. “If they do not develop a lens of racial equity, we could end up propagating the ills that currently exist.”

To improve the curriculum, the task force is leaving no stone unturned. “We’re looking at what’s being done at other institutions who might be doing things a little better than us,” said McKinnond. “We’re also looking at what we want to see in our own courses.”

One of the first aspects the task force considered was the demographics of the patient cases that were part of the inquiry-based learning program. In the past, cases skewed toward white patients, which limited students’ exposure to the concerns of racially diverse patient populations.

“We are building more diversity into the cases our students work with,” said McKinnond, giving an example of how understanding patients’ backgrounds can help outcomes. “We have to learn to listen and show compassion,” she says. “Simple things like choosing medication to treat a patient. Is it on the three-dollar list or the $50 list? That could be everything when it comes to a patient adhering to their treatment regimen.”

Stonerook added that the goal of the program is to reinforce the needs and importance of the patient. “We have to re-center the experience of the patient in providing care,” he added. “That’s a central part of inquiry-based learning.” Most importantly, Stonerook said that racial equity shouldn’t be simply tacked onto the curriculum, but woven into it.

Stonerook and McKinnond agree that the goal of the Racial Equity Task Force is to make a positive impact on the PAs who graduate from Wake Forest. They want graduates to take on the challenge of creating a better, more equitable healthcare system that serves all patients.

It may seem like a massive challenge, and it is, but McKinnond believes that PAs might be best-suited to the task. Because they spend just two years in school, they can make an impact quickly.

“PAs are a growing workforce, and we know they are going to be a driving force that will help the healthcare industry,” she said. “PAs can make sure that fewer patients are left behind.”

She concluded that she hopes Wake Forest students don’t feel overwhelmed by the challenge, but instead feel empowered. “As a PA, you might be just one person, but you’re not helpless,” she said. “You may not be able to fix it all yourself, but there are things you can do to make a difference.” 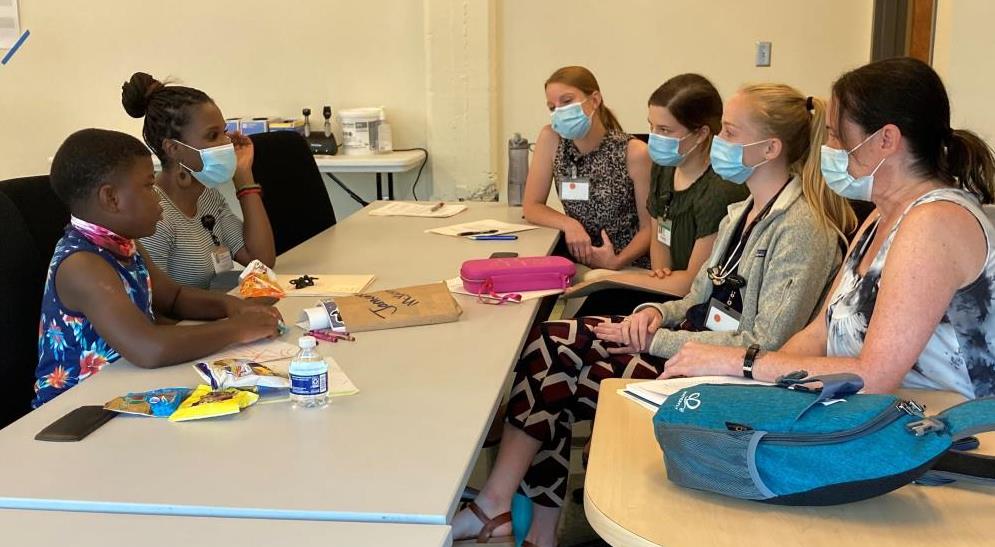 Andrea McKinnond with her son, participating in the Pediatric Workshop during Clinical Year Prep in 2021.