Dr. John “Jack” Monroe and his wife, Elizabeth “Boo” Breeden Monroe, very generously donated their collection of medical antiquities to the institute in 2009. They developed the collection over a 60-year period beginning when Dr. Monroe was a medical student at Harvard. Dr. Monroe was a meticulous collector -- fleems, scarifiers, bleeding bowls, bottles, metal trepanners, and oddments of all the things that doctors used over the last 500 years, some as early as the late 1600s.

The Monroe’s Life Credo -"But man is not made for defeat. A man can be destroyed but not defeated."

Dr. Monroe found beauty and inventiveness in these items, many of which others might see as “ghoulish relics” of a barbaric age. Many of the instruments in his collection came from England,

The Monroe's son, John, poses with a variety of bleeding bowls on display at the Institute 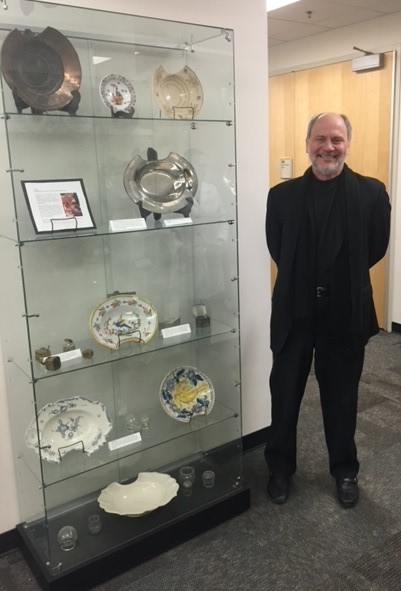 Seven years after making the gift, in 2016, Dr. Monroe passed away at the age of 93. Boo followed just two months later at age 92.

From a historical perspective, this is an amazing gift. It represents both a wide time period and a wide array of treatments. For example, the collection includes many wonderful artifacts that were used in bloodletting, a practice for centuries past.  But it also includes many interesting items from the previous century, such as a mask used to administer ether as an anesthesia and instruments used in home deliveries of babies.

Having these items in one location – and available for people to see – is a huge asset for our institution and to the preservation of artifacts of the history of medicine. Having this collection on site is a great resource to illustrate how medical treatment has advanced through the years. The location of the collection is especially significant. It is right outside the door of the manufacturing facility, where bioengineered tissues and organs and cell therapies for patients are developed. This gives tour groups the opportunity to learn about the future of modern medicine, but also to understand more about exactly how far science and medicine has come.

Read more about the life and times of Dr. Monroe at these links: