Building a Better Body on a Chip 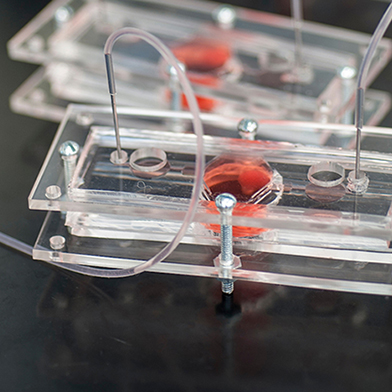 Using the same expertise they’ve employed to build new organs for patients, scientists at  Wake Forest Institute for Regenerative Medicine and colleagues have engineered micro hearts, lungs and livers that can potentially be used to test new drugs. By combining the micro-organs in a monitored system, the researchers aim to mimic how the human body responds to medications.

The goal of the effort, known as a “body-on-a-chip,” is to help reduce the estimated $2 billion price tag and 90 percent failure rate that pharmaceutical companies face when developing new medications.

Drug compounds are currently screened in the lab using human cells and then tested in animals. But neither of these methods adequately replicates how drugs affect human organs. In many cases during testing of new drug candidates – and sometimes even after the drugs have been approved for use – drugs have unexpected toxic effects in tissues not directly targeted by the drugs themselves.

“There is an urgent need for improved systems to accurately predict the effects of drugs, chemicals and biological agents on the human body,” said Anthony Atala, MD, director of the institute and senior researcher on the multi-institution body on a chip project, funded by the Defense Threat Reduction Agency.

In Scientific Reports, published by Nature, the research team reports success engineering micro-sized 3D organs, known as organoids, and connecting them together on a single platform to monitor their function. This is the first reported success using 3D organ structures, known to be higher functioning and to more accurately model the human body.

The organoids are placed in a sealed, monitored system – complete with real-time camera. A nutrient-filled liquid that circulates through the system keeps the organoids alive and is used to introduce potential drug therapies into the system.

The scientists conducted multiple scenarios to ensure that the body-on-a- chip system mimics a multi-organ response. For example, they introduced a drug used to treat cancer into the system. Known to cause scarring of the lungs, the drug also unexpectedly affected the system’s heart. However, a control experiment using only the heart showed no response.

The scientists theorize that the drug caused inflammatory proteins from the lung to be circulated throughout the system. As a result, the heart increased beats and then later stopped altogether, indicating a toxic side effect.

“This was completely unexpected, but it’s the type of side effect that can be discovered with this system in the drug development pipeline,” said Aleks Skardal, PhD, assistant professor at Wake Forest Institute for Regenerative Medicine.

Scientists are working to increase the speed of the system for large-scale screening and to add additional organs.