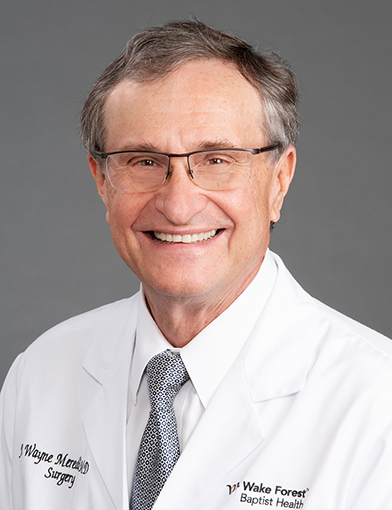 I am the Richard T. Myers Professor and Chair of the Department of Surgery (formerly General Surgery), Chief of Clinical Chairs and Chief of Surgery at Wake Forest Baptist Health.  As a graduate of Emory University, I received my medical degree from Bowman Gray School of Medicine and joined the faculty of Wake Forest University Health Sciences in 1987 and was named Professor and Chairman of General Surgery in 1997 and Director of Surgical Sciences from 2000 to June 2014. I hold a cross-appointment at the Institute for Regenerative Medicine and a joint appointment as Professor of Pediatrics in the Department of Pediatrics.

I have served as Director of the American Board of Surgery and the American Board of Thoracic Surgery.  I am a past-president of the American Association for the Surgery of Trauma (AAST), the Southern Surgical Association (SSA), the Halsted Society, the Eastern Association for the Surgery of Trauma (EAST), and the Southeastern Surgical Congress (SESC).   I also served as the Medical Director of Trauma Programs of the American College of Surgeons (ACS) from 2006 through 2010 and was Chair of the Committee on Trauma from 2002 to 2006.  In 2014, I was the recipient of the ACS Distinguished Service Award recognizing my scientific contributions to cardiovascular physiology during resuscitation, trauma registries, and trauma systems as well as my leadership and dedicated service as a Fellow of the ACS.

In October 2019, I was nominated as President-Elect of the American College of Surgeons.